Want to come to the US? Be prepared to hand over your passwords if you're on Trump's hit list 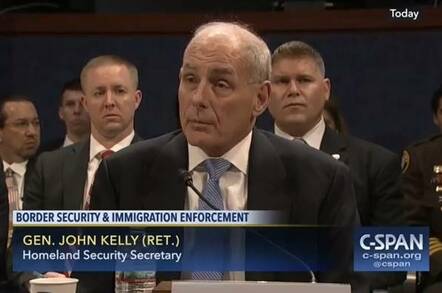 The new boss of the US Department of Homeland Security plans to dig deeper into the lives of some of those wishing to enter the Land of the FreeTM – even going as far as demanding web passwords and banking records.

In a Q&A with the House Homeland Security Committee on Tuesday, John Kelly said the previous administration had been hesitant to scrutinize immigrants' social networking accounts during their vetting, and that this was a “glaring deficiency.” Instead, he wanted “enhanced vetting,” which hopefully isn’t the same as torture enhanced interrogation.

Previously, tourists, travelers and visa holders were warned they may have to hand over their online account names and handles so their public profiles can be studied by border agents and immigration officials.

Now Kelly wants to take that further, by demanding passwords from some visa applicants so officials can log into foreigners' Twitter, Facebook, and online banking accounts, and rummage around for any eyebrow-raising non-public posts, messages and transactions. If applicants refuse, they can't come in.

“We want to say ‘what kind of sites do you visit and give us your passwords,’ so we can see what they do,” Kelly explained, in response to a question from Representative Clay Higgins (R-LA).

“We want to get on their social media with passwords – what do you do, what do you say. If they don’t want to cooperate then they don’t come in. If they truly want to come to America they’ll cooperate, if not then ‘next in line’.”

By "they", Kelly was referring to refugees and visa applicants from the seven Muslim countries subject to President Trump's anti-immigration executive order, which was signed last month. Given the White House's tough stance on immigration, we can imagine the scope of this "enhanced vetting" growing to cover visitors of other nationalities. Just simply wait for the president to fall out with another country.

Kelly said this invasive vetting of people's online personas and accounts could take weeks or months, and that applicants would just have to wait until it was done. Representative Higgins said he agreed, and was anxious for Homeland Security and others to start trawling through people’s social media pages. Higgins said handing over such credentials should be mandatory.

President Obama’s administration had requested public comment on allowing agents to ask travelers for their social media account names, on a voluntary basis. But Kelly made it clear that handing over handles wasn’t enough – the DHS could soon demand passwords as well. No new policy has been set in stone, though, Kelly said. No final decisions have been made.

In order to keep America safe, Kelly said he would need between 5,000 and 10,000 new staff. However, he would accept fewer provided they were properly trained and could do their jobs efficiently.

Kelly also said that financial records will be requested of some visa applicants, as vetting staff need to “follow the money,” and where possible, be provided with details of salaries and spending.

All of this is on hold right now, though, while US Department of Justice lawyers, state attorney generals, the ACLU, and the courts sort out whether or not the president's anti-immigration executive order is legal. Kelly made it clear which side he was on.

“I work for one man, his name is Donald Trump, and he told me ‘Kelly, secure the border,’ and that’s what I'm going to do,” he said.

This did not go down well with Representative Kathleen Rice (D-NY). “You were chosen by him, you work for us. I’m sure that’s what you meant,” she shot back. ®