If a sat's sinking and the radio goes down, it's time to light up! 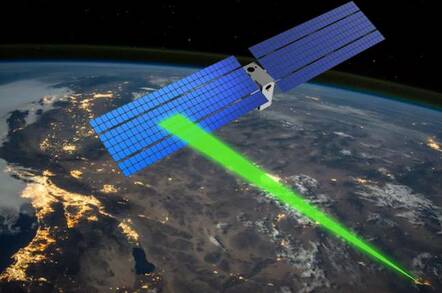 A satellite's radio-communications failing is a crisis if you need to keep it from drifting off station, so a pair of boffins suggest firing up an Earth-bound laser as a backup comms channel.

The idea comes from Xinchen Guo of Purdue University and Jekan Thangavelautham of Arizona State University, in a paper they've prepared for the 2017 IEEE Aerospace Conference to take place in March.

NASA's LADEE demonstrated both the viability of laser as an Earth-to-space communications channel and its bandwidth, lighting up a 622 Mbps link using its Lunar Laser Communication Demonstration.

Guo and Thangavelautham are looking at what to do if, for some reason, a satellite's radio communications kit fails. In their pre-print at Arxiv, they suggest mission controllers could use a laser as an alternative channel – using the satellite's solar panels as the receiver.

Using photovoltaics as a receiver needs filters to recover the signal, and the Guo/Thangavelautham experiment in Phoenix, Airzona used a violet laser and showed that it's possible to discriminate between the signal and the background sunlight. 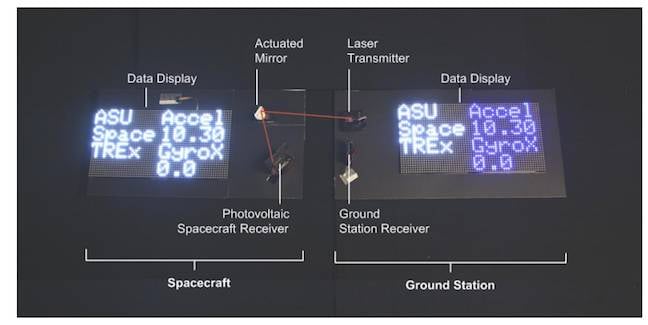 It's only a model: Guo's and Thangavelautham's benchtop demonstration

A satellite that's lost radio contact is going to need to establish a bidirectional channel. That's a more thorny problem, since a laser able to send a useful signal back to Earth will take up too much power. The paper notes that LADEE “required diverting significant onboard power for communication and was operating at a low duty-cycle”.

Instead of putting a high-power laser on a satellite, the researchers propose a simple return channel: an actuated mirror, that can create simple binary signalling back to Earth, depending on whether the ground-based laser is reflected back.

That greatly limits the capacity of the return channel to how quickly the mirror can move – to 10 kilobits per second – but that's still useful. For example, if mission controllers are trying to send commands to the satellite and need an acknowledgement message.

As well as putting the laser power on the ground, the scheme puts much more technical demand on the ground station than the satellite: it needs to be sensitive enough to detect a weak signal from the satellite, and it needs to “look behind or point-ahead to anticipate and maintain a link with a moving spacecraft”.

Even CubeSats, the pair reckons, can be manoeuvred accurately enough to reflect signals back to Earth: “Advances in attitude control of CubeSats make it possible for them to achieve 10-20 arc second pointing accuracy, which is more than sufficient for laser communication requirements.” ®