'A sad day for the internet' says cartographic Brit competitor 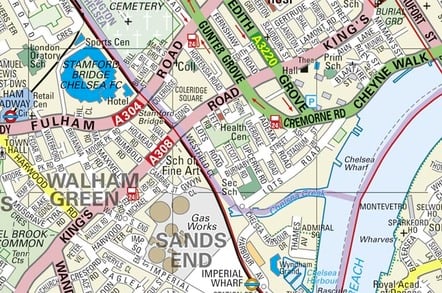 Streetmap has lost its application to appeal against last year’s High Court judgement that Google did nothing wrong by promoting its own Maps product above Streetmap’s.

“The bully boys won the day,” said Streetmap, immediately after the judgement was delivered. “This is a sad day for the internet.”

“The essential thrust [of Streetmap’s argument] was that the respondent was giving Google Maps an unfair advantage,” he said. “The fact that the inclusion of a map at the top of the page would put a link to the applicant’s sites lower down the page was of little significance.”

The judge also ruled that forcing Google to display links to competitors’ maps, or even substitute their maps for the customary live Google map displayed in search results, “would involve much greater complication for [Google] than it would first appear.”

“Two grounds of appeal are made by applicant,” Lord Justice Jones said. “Firstly, it is said the judge [Mr Justice Roth, in the original hearing] erred in finding an abuse of dominant position occurred.”

This centred around the original judge’s decision that any abuse of dominance must be “appreciable”. He ruled that Google promoting Google Maps to the top of its search results above competitors’ products did not produce an appreciable abuse of dominance.

“So far as ground two is concerned,” continued Lord Justice Jones, “the applicant submits the OneBox disproportionately favoured Google Maps. Firstly, as the party against whom allegations were raised, it was for the respondent to show that the abuse was objectively justified. However, the respondent was unable to show that… [they] had not discharged the burden of proof.”

The OneBox is the box which pops up in response to certain geographical search queries made on Google. It features a Google Map and often address details.

Although Streetmap did put forward a number of things it said Google could have done to redress the situation, Lord Justice Jones concurred with the earlier judgement in dismissing all of these.

Addressing the court on behalf of Streetmap before Lord Justice Jones gave his judgement, Tom Sharpe QC said: “What [Mr Justice Roth] should have done - ‘this is an important element of a case being pleaded, I should hear evidence about it because the burden is... square on Google’ - but he didn’t.”

Mr Sharpe told the court that Mr Justice Roth had effectively got the burden of proof wrong and left Streetmap “in the unenviable position of having to prove a negative” and added that that “was an improper and unfair burden on Streetmap which it was unable to discharge.”

He added that Google “produced nothing and the judge filled the vacuum” on its behalf.

The judge added: “Any potential effect on that related market had to be appreciable, and he found no appreciable effect had been demonstrated…. The respondent’s conduct was objectively justified.”

Permission to appeal against Mr Justice Roth’s original judgement of February 2016 was refused. ®