But unlike David Cameron, they know what LOL means 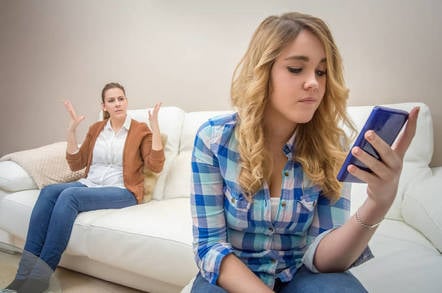 Most adults have no idea what their kids mean when they use text terms such as "KMS", "99" or emoji faces with cross eyes, according to an unsurprising piece of research by BT.

The survey of 4,500 adults was conducted by BT to raise awareness of Safer Internet Day. "Popular online slang and emojis used by children to communicate with friends may as well be a foreign language to most parents," said the report.

More than 50 per cent of adults who took part in the quiz were aware of the secret meanings behind 182 (I Hate You), WTTP? (Want To Trade Pictures?) and (L)MIRL (Let’s Meet In Real Life).

When used by kids the cheeky monkey with paws over its mouth translates to "I won’t tell anyone" but more than half of parents did not know the meaning.

Some terms such as KMS (Kill Myself) although used in jest by some teens were thought to mean “Keep My Secret” by 65 per cent of parents.

Apparently, the number "99" is used by children to indicate to their friends that their "Parents Have Stopped Watching" – a code which parents could find useful to know.

Unlike David Cameron, who infamously signed off his texts to Rebekah Brooks with LOL, thinking it meant "lots of love" most people know it now as laugh out loud, said the research.

Carolyn Bunting, general manager at not-for-profit online safety organisation Internet Matters, said: “Children’s use of the internet is developing at a rapid pace. While it is unrealistic to expect parents to understand every piece of internet slang their children will ever see, online safety starts with a conversation.

"It’s vital for parents to talk to their kids about their digital worlds, including the sorts of things they might experience online, and the types of issues to be aware of, from cyberbullying to privacy." ®