'AND WE MAY NEVER MAKE A PROFIT,' laughs photo-spaff app maker all way to the bank 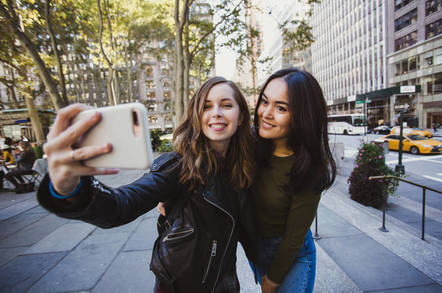 The builder of sometimes cute and occasionally terrifying photo filters says in a filing to the SEC that it will debut on the stock market later this year, specifically the New York Stock Exchange using the symbol SNAP. Investors have been cautioned they may never even see the company climb out of the red, though.

Snap says that it hopes to eventually crack into the black on the strength of its advertising business. The company is banking on ads sold and served to its massive active user base (currently pegged at 158 million people) as its primary source of sales.

"Substantially all of our revenue comes from advertising, so our ability to generate revenue in a particular country depends on the size of its advertising market," Snap said.

The upstart, founded in 2011, also reckoned its "business would be seriously harmed" if net neutrality rules are dumped in the US (and it looks like they will be). Snap fears mobile networks will penalize network traffic carrying its photos in favor of packets carrying their own pic services.

The biz has also just signed a deal to spend $400m a year on Google's cloud hosting over the next five years – that's $2bn in total for the Gmail giant.

In the meantime, however, Snapchat is losing hundreds of millions of dollars annually. Last year, Snap says it blew through more than a half-billion dollars of investor cash.

Though the losses are mounting, so are revenues. Snap Inc. says it made $404.5m last year, compared to just $58m the prior year. The per-user revenue (ARPU) for 2016 was $1.05 worldwide and $2.15 in North America. The ARPU would need to continue to grow for Snapchat, as the company notes its growth has slowed and warns that it will likely decline over time.

Snapchat app chaps Snap will slap $2bn in Google cloud’s lap – but any chat about profitability is crap https://t.co/V4zoHSTc73

On top of the caution over its profit-challenged business model, Snap Inc has also been hit with a lawsuit from a former employee who claims executives have for years been misleading investors and advertisers by artificially inflating user numbers.

Finally, from the SEC paperwork, we notice that Snap cofounder Reggie Brown was bunged $158m to settle his 2014 lawsuit against fellow founders Evan Spiegel and Bobby Murphy. ®