So brave, so very brave 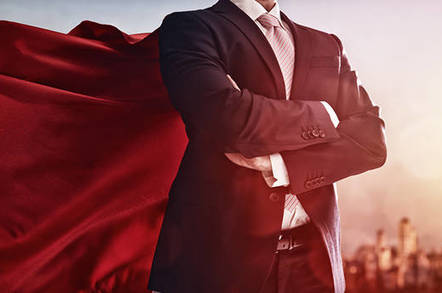 Tech goliaths Apple, Facebook, Google and Microsoft are planning to take a stand against the Trump Administration's hardline immigration policy ... because their bottom line demands it.

Having sidled up to King Donald in New York City before he took over as US president, tech CEOs have stayed mostly quiet during two of the most tumultuous weeks in recent US political history. To be fair, a few top execs posted carefully worded statements on their websites while citizens protested against Trump's crackdown on Muslim immigrants. Thanks for your opinions, powerful rich people.

However, now that the White House is planning to shake up the H-1B visa program, which tech companies are heavily reliant on to get skilled-slash-cheaper workers into the country, funnily enough we're seeing a slightly more vigorous response.

A draft of a letter, addressed to President Trump, that is making the rounds among tech giants on America's West Coast makes some brief allusions to American values before getting down to business: "As entrepreneurs and business leaders, our ability to grow our companies and create jobs depends on the contributions of immigrants from all backgrounds."

The letter takes a softball approach and goes out of its way not to condemn the president's executive order, noting that the tech giants "share your goal of ensuring that our immigration system meets today's security needs and keeps our country safe," and that they "welcome the changes your administration has made in recent days." The companies will also "help your administration identify other opportunities to ensure that our employees can travel with predictability and without undue delay."

All the best words

In fact, most of the letter reads as though the tech CEOs actually agree with the controversial order to ban people from certain countries from entering the country: it concludes by asking Trump to "use us as a resource to help achieve immigration policies that both support the work of American businesses and reflect American values."

The strongest criticism of the order – which sparked thousands to protest in person at airports across the country and saw an unprecedented dissent memo from the State Department – comes in a single mealy-mouthed sentence that says "while security and vetting procedures can and should always be subject to continuous evaluation and improvement, a blanket suspension is not the right approach."

In contrast to the strong, principled stance taken by Microsoft's president Brad Smith on the issue of the federal authorities trying to access people's private data on servers held outside the United States, on Thursday Smith went out of his way not to question the dubious morals or legality of Trump's immigration executive order and instead asked for special favors for Microsoft.

"The President expressly gave to the Secretaries of State and Homeland Security the authority to grant exceptions on a case-by-case basis," Smith notes in an official blog post, adding: "Today Microsoft is filing a formal request asking these cabinet officers to create a process to grant exceptions that will permit 'Responsible Known Travelers with Pressing Needs' to re-enter the country while protecting the nation's security."

Smith has even drafted language that would make it easier for Microsoft and similar tech companies to get their workers in the country – while leaving the hundreds of thousands of other likely affected individuals to their own devices.

And just to make sure the president hears it from the horse's mouth, Smith used Trump's favorite medium and his daily tweet to link to the post with the message: "Amid the broader debate on immigration, a practical proposal to address the hardship faced by some people today."

The reality is that Silicon Valley and the broader tech industry are highly reliant on non-US citizens to stay competitive. Thanks to the concentration of big tech companies in California, it is a highly valued destination for workers, especially coders, from all over the world – and the United States' educational system simply does not provide enough of them to handle demand.

Every big tech company has several people in the HR department dedicated to nothing but working the US visa program and getting individuals in. They often know government immigration officials on first-name terms due to the constant and high-volume rate of communication.

The recent "Muslim ban" has already had an impact: Microsoft's Smith notes that 76 employees were immediately affected. Likewise, Google. It started immediately flying its people back into the country when it heard about the executive order.

That problem would grow exponentially, however, if Trump decided to carry out his threat to change the H1-B worker visa program and so force more companies to "hire American."

And while several CEOs – notably Google's Sergey Brin and Apple's Tim Cook – have made plain their personal views on Trump's order, others have stayed notably quiet.

Facebook COO Sheryl Sandberg, who wrote an entire book about women having the confidence to lead, was asked on stage on Wednesday about her failure to attend or mention the Women's March the day after Trump's inauguration. "I just felt bad that I couldn't be there," she responded. "And, once I felt bad, I felt like I couldn't say anything."

In recent days, tech companies have made big play about the money they are donating to causes supporting immigration. But in each case it has been the companies' own employees that have forced the issue, with the companies promising to match the funds that they put forward.

Tech leaders seem to get this wrong a lot: It’s ok to use an economic argument to support a point, but the core must be the moral argument.

In a country where corporations are legally viewed as people and persistently promote themselves as individuals, with personal views on everything from social issues like gay marriage to congratulating individuals (one recent note: Beyonce's twins and whatever this is from Popeye's Chicken), the sad truth is that the largest and most powerful companies in the world have decided that it is not in their best interests to upset the notoriously petty and thin-skinned Donald Trump, even when his actions go against their and their employees' moral and ethical values.

But hit em where it hurts – the wallet – and Big Tech will do everything it can... to carve out special exceptions for itself. ®