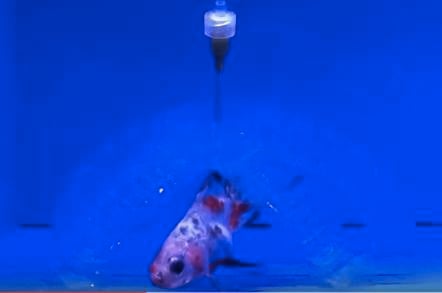 Videos Watch out – robots are now fast and strong enough to catch live fish and kick balls underwater, according to a group of engineers from the Massachusetts Institute of Technology.

The fancy gizmos aren't like the conventional metallic, rigid droids people often imagine when thinking of robots. These bots are squishy, transparent and are made entirely of hydrogel.

Soft robotics is a growing area, as researchers explore possible applications in biomedicine, prosthetics and the military.

"Hydrogels are soft, wet, biocompatible, and can form more friendly interfaces with human organs," said Xuanhe Zhao, coauthor of the paper and associate professor at MIT.

"We are actively collaborating with medical groups to translate this system into soft manipulators such as hydrogel 'hands,' which could potentially apply more gentle manipulations to tissues and organs in surgical operations."

Since the material is mostly made of water and is transparent, the robots are visually and acoustically camouflaged in water, according to a paper in Nature Communications [paywalled].

The work was partly funded by the US Office of Naval Research, the MIT Institute for Soldier Nanotechnologies, and the National Science Foundation.

At first glance, the gelatinous mounds may look unimpressive compared to their harder-bodied cousins, but what they lack in pizzazz they make up for in agility. (The video was produced and edited by Melanie Gonick/MIT. Hydrogel robot footage: Hyunwoo Yuk/MIT Soft Active Materials Lab.)

Each robot is connected to rubber tubes and moves when water is pumped through its body and also due to changes in water pressure inside and outside its frame. The different 3D-printed designs are specialized for various motions. As seen in the video, the robot that resembles a claw tool often found in toy machines can grab fish; the long thin structure that curls up is used to kick a ball; and one that closely resembles a fish can swim.

Roboticists often look to the natural world for inspiration, as animals have evolved to move and adapt to their environments over millions of years. The "most vertically agile" robot, Salto, was modelled on bushbabies that are capable of reaching lofty heights through multiple jumps with their powerful hind legs. MIT's latest robots are similar to leptocephali – flat, transparent, jelly-like eel larva.

Elsewhere in the world of robotics, a video sneakily posted by Steve Jurvetson, a venture capitalist, shows the latest droid in development from Alphabet's robot biz, Boston Dynamics.

It's a fast-moving fold-up robot with metal crutches for arms whizzing about on wheels, capable of performing little tricks like jumping over ramps. It has been described as "nightmare inducing" (skip to 3:44 for the video). ®