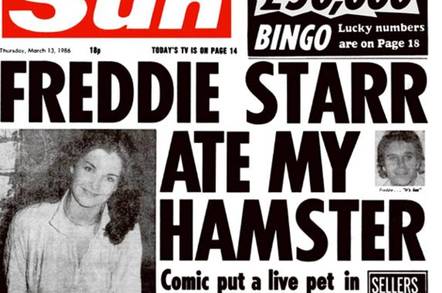 Turning over massive tracts of land to maize-raising has destroyed the cuddly cheek-stuffers' previously diverse diet, with their monotonous intake also exposing them to vitamin B3 deficiency.

According to The Local, researchers were already concerned about the prospects for the Eurasian hamster, which unlike the better known Syrian variety found in pet shops, is an imposing beast, capable of reaching as much as 35.5cm (14 inches) in length, not including its tail.

The impact of pesticides and industrial ploughing on their ranges had already been identified as speeding the beasts’ decline.

However, lab-based experiments at the University of Strasbourg showed that a diet of maize - as opposed to their traditional menu of assorted grains, roots and insects - had an additional devastating effect on the animals’ behaviour.

In a control group fed on wheat, with a smidgeon of clover and worms, four-fifths of pups survived weaning. However, in the corn-fed group, just five per cent of pups made it.

When scientists delved further, they were horrified by the fate of the pups.

"Females stored their pups with their hoards of maize before eating them," the shocked scientists reported in British Royal Society journal Proceedings B. "Pups were still alive at that time."

In addition, the animals showed bizarre behaviour, running around in circles, climbing and banging their feeders when scientists came into the lab.

The scientists drew a line between the corn-crazed critters and outbreaks of pellagra in human society over the centuries - symptoms of which include dementia, aggression and mental confusion.

"Improperly cooked maize-based diets have been associated with higher rates of homicide, suicide and cannibalism in humans," the researchers note.

Restoring diverse habitats will of course take time - if it happens at all.

In the mean time, if you’re confronted by a horde of corn-crazed mega hamsters, the recommended concrete action may be a swift blow to the unfortunate creatures’ heads - or, more humanely, the rapid deployment of a vitamin B3 supplement. ®

Warning: no IT angle