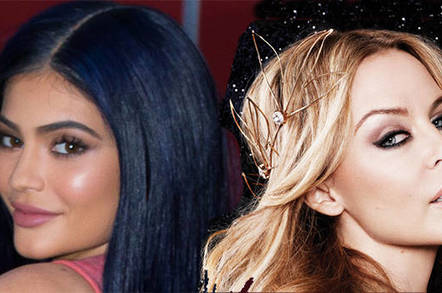 It was a battle of the Kylies: in one corner legendary actress and singer Kylie Minogue; in the other, a girl that occasionally appears on a reality TV show.

But it was the latter, Kylie Jenner, who decided last year to register her first name in various classes of trademark as just part of what has become the most improbable business empire of recent years: a coven of Kardashians offering overpriced tat to young girls who don't know any better.

Kylie wanted to put legal protections around her "brand" – Kylie – but Kylie, the 176-award-winning, world-famous artiste wasn't too keen on the idea, given that the other Kylie was little more than a "secondary reality television personality" – her words, not ours (ours would be "pointless spawn of the selfie generation").

So out of concern that the application would "cause confusion" – but more importantly would "dilute her brand" – Real Kylie lodged an objection [PDF] with the United States Patent and Trademark Office.

And, amazingly, after several breaks for settlement negotiations, this week Real Kylie withdrew and the case was dismissed without prejudice [PDF], leaving Whatsherface Kylie free to pursue trademarking her name. What happened? We don't know. But presumably Real Kylie got some kind of payoff.

It gets better – well, worse

Amazingly, this is not the first time the Kardashians have gotten into trademark disputes – even among their own ever-expanding family of attention-obsessed relatives.

Well, that was too much for the Kardashian coven, who opposed the trademark: Kim through her Kimsaprincess Inc corporate entity; Khloe through Khloemoney Inc (we swear we're not making this up); and Kourtney through 2Die4Kourt.

The sisters claimed that allowing the mark would cause them to "suffer irreparable injury to their reputation and goodwill" – although you have to wonder how, exactly.

But good news! Just last week, Blac/Angela failed to respond to her sisters-in-law accusing her of causing irreparable injury to their reputations and the trademark application has seemingly been dropped for procedural reasons. Why? It might be something to do with the fact that Rob Kardashian announced last month – on Instagram – that he and Renee/Blac have broken up. All's well that ends well.

And that concludes this year's mindboggling delve into the lives of that weird group of LA women (and that includes you Caitlyn). ®

KylieKonnect - for all your Oz songbird needs

Kylie wraps herself round Dalek

Kylie confirmed for Who Xmas special

Oz popstress embarks on Voyage Of The Damned

Rubs back and says, 'I know how you feel'

Brief We should be so lucky