Still better than most of the press releases we receive 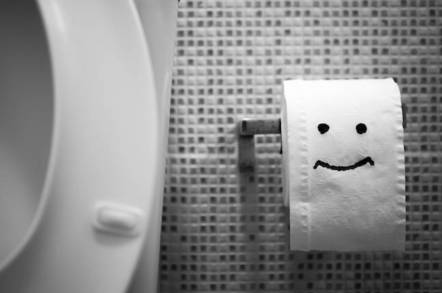 An Italian couple have been nicked by counter-terror cops for, some, er, smearing letters they had sent to public figures.

According to the Italian rozzers, over a two-year spree, the 71-year-old and his 54-year-old partner sent threatening and defamatory letters to high-profile targets, which also contained toilet paper stained with faeces.

The letters had been sent to the directors of Copenhagen Zoo after the death of a giraffe there, and to teachers who had been accused of child abuse, to football clubs that had earned the couple's displeasure, and to politicians. The couple is alleged to have distributed defamatory and threatening letters in envelopes containing toilet paper soiled with their own or their pet dog's poop.

The Milanese branch of Italy's counter-terror coppers, DIGOS, tracked down the pair and cuffed them. DIGOS officer Carmine Mele said that the 71-year-old, who is a former police officer, "followed the news closely and was very up to date on things".

The man maintained a ledger of the names and addresses of targets, alongside the motivation for sending the letters, said cops. These were reportedly divided into categories of murderer, paedophile, corrupt, thief, and so on.

According to The Local, the police managed this "after observing the letters all shared some similar characteristics: black ink, cursive writing, and stamps from foreign countries (most often Azerbaijan, Bhuta and Zaire). The letters were then traced to Milan."

The pair were caught while posting another of their letters. After raiding their home, the police found another 110 letters that the couple intended to send. ®

Schermata blu di errore: Italy might be in lockdown, but the sh!tshow must go on