To be fair, you might too. But you're not the most powerful man in the world 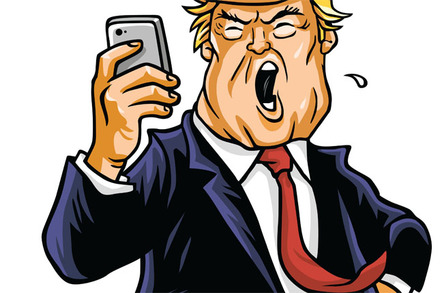 President Donald Trump is still using a conventional Android phone to post on Twitter since moving into the White House.

The New York Times reports that the USA's newly installed president is using his old phone mainly to post to Twitter rather than make calls. Security experts nonetheless warn that Trump's use of a personal device opens the door to all manner of potential attacks.

Avi Rosen, CEO of mobile security specialist Kaymera, commented: "The president has reportedly been given a locked-down phone by the NSA. So who is using the Android phone for tweeting, and what other information and services does it have access to? Does it have any security measures on it?

"Mobile devices are extremely vulnerable to being exploited by hackers, and turned into surveillance devices – recording conversations, location tracking, capturing data on devices and forwarding it, even taking video footage."

German Chancellor Angela Merkel's second smartphone, which she used for party business, was infamously pwned by multiple intel agencies, including but not limited to the NSA.

This all sits awkwardly with Trump's strident criticism of Hillary Clinton's use of a personal email server during the time she served as Secretary of State. During his campaign, Twitter updates by Trump came largely from either an iPhone or Android device. The angry late-night tweets came from an Android phone, leading data analysts to conclude that they came from Trump himself. The Apple updates were different in tone and character and are thought to come from Trump campaign staffers.

Rosen warned: "If the president – or even one of his core team – is using a second device, it has to be fully secured against all threats. All it takes is clicking on a single malicious link or opening an innocent-looking attachment to compromise the device, and these can easily look as if they come from a trusted source." ®