This goldfish and its steerable robot tank will destroy humanity

Mark our words. First this uni campus, then the world 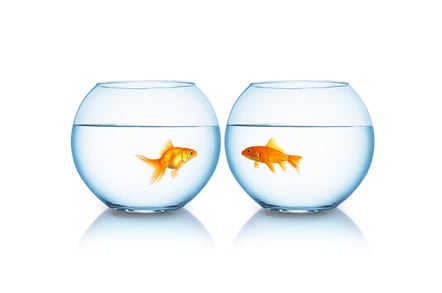 The safe way to keep those dangerous goldfish under control

RotM Students at Carnegie Mellon University have made a mobile goldfish bowl that the lucky fish can drive around by itself – and they've filmed it for posterity.

The video shows a reasonably large fishtank on wheels being “driven” around by an unusually active goldfish.

The Reddit thread – yup, it’s one of those – reveals that “the direction and speed of the robot is determined by the position of the fish relative to the middle.”

The video also gives a great demonstration of the free surface effect, which is where a liquid in a part-filled tank on a moving vehicle sloshes around, destabilising the vehicle. The fishtank is about three-quarters full.

If left unchecked, particularly in ships at sea with a compartment flooding through damage, the free surface effect can create a positive feedback loop, fatally destabilising the vehicle. Happily, that does not happen to the robot fishtank, which instead lurches around at the unwitting commands of an increasingly worried-looking goldfish.

The battery-powered robot was powered by a Raspberry Pi 1, and the source code for the whole project can be found on Github. ®