This isn't going to end well 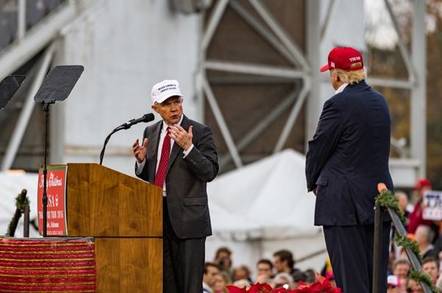 In Sessions ... Trump and his new AG

US President Donald Trump's pick for his Attorney General and head of the FBI will have security specialists nervous, since both believe breaking encryption is a good idea.

Senator Jefferson Beauregard "Jeff" Sessions III (R‑AL) is Trump's pick for the top legal job in the US. In congressional testimony, he outed himself as a committed backdoor man when it comes to encryption. In the written testimony [PDF] to Senator Patrick Leahy, (D‑VT) he laid out his position.

That's going to be bad news for people who favor strong encryption. The finest minds in cryptography have repeatedly pointed out the impossibility of building a backdoor for law enforcement into secure encryption, since there's no way to stop others from finding and exploiting the Feds-only access. If backdoors are mandated, then it could open up all our data to attackers. Encryption is either strong or backdoored.

Sessions' appointment is also going to cause Apple CEO Tim Cook and other tech execs to wear long faces. During the San Bernardino iPhone case, Sessions was one of the main voices in Congress calling for Apple to create hacking tools for its own operating system and hand them over to the FBI.

"Coming from a law enforcement background, I believe this is a more serious issue than Tim Cook understands," Sessions said at the time. "In a criminal case, or could be a life-and-death terrorist case, accessing a phone means the case is over. Time and time again, that kind of information results in an immediate guilty plea, case over."

Meanwhile, Trump has reportedly decided to keep James Comey as director of the FBI. FBI bosses are appointed on 10-year terms to shield them from American politics and similar influences, although presidents can fire them.

Republican-leaning Comey too thinks backdoors (or front doors as he likes to call them) are going to be essential for law enforcement to stop the communications channels of crooks and terrorists "going dark."

Comey has said that he wants an adult conversation about encryption this year, and by adult he presumably means that anyone who opposes him is being childish. With the new AG getting his back, Comey might have more success than before in weakening encryption. ®