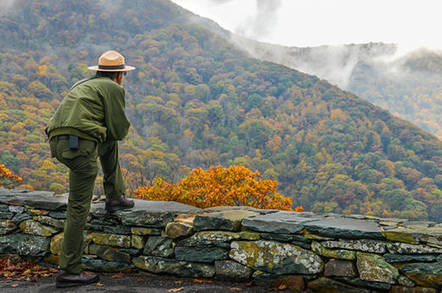 In an extraordinary and seemingly unlikely battle, US President Donald Trump and his transition teams have had their authority challenged by none other than park rangers. On Twitter.

That led to the White House over-reacting and ordering the deletion of those (factually accurate) tweets, which in turn has resulted in the creation of an alternative NPS account (@AltNatParkSer) – calling itself "The Unofficial 'Resistance' team of U.S. National Park Service" – that has quickly overtaken the official account in terms of followers.

That account has since posted a series of anti-Trump messages that have been widely pushed over social media and even started becoming their own memes. One directly challenged the president: "Can't wait for President Trump to call us FAKE NEWS. You can take our official twitter, but you'll never take our free time!" At the time of writing, the defiant message has been retweeted over 70,000 times.

When officials subsequently claimed that a series of tweets about climate change from the Badlands NPS in South Dakota were the work of a former employee rather than a rogue one, other park accounts picked up the mantle.

The Golden Gate NPS had previously posted quotes from Martin Luther King Jr on MLK Day that were seen as critical commentary on Donald Trump. Soon after Badlands NPS' tweets were deleted, it started posting its own.

Then the Death Valley NPS in Nevada started tweeting about the Japanese internment camps in the region during the Second World War with quotes from some of those imprisoned.

(Incidentally, tweets from a Department of Defense account that flagged an old post about how Twitter posts can predict the state of someone's mental health – seen as a commentary on Trump personally – were also put down to an "unauthorized user" using an "old password" by the White House which, amazingly, carried out an investigation into the tweet.)

What kind of fool

In a Trumpian version of the Streisand Effect, the NPS has never seen so much engagement: its official account saw 50,000 new followers in just four days, bringing it to 350,000. The Badlands NPS account meanwhile has grown from 70,000 to more than 185,000 since the argument kicked off. Golden Gate NPS has jumped from 11,500 followers to 28,500 in a single day. And the Alternative National Park Service account – started less than a day ago and run by park rangers in their off-time – now has over 580,000 followers.

All of this could, of course, be seen as a minor diversion to the much bigger business of government, but it appears to have found greater resonance following reports that Trump officials are trying to force other government agencies – particularly those working on climate change – to remove information from official websites and databases as well as place gagging orders on employees, which bans them from making any information public without approval from outside their department.

Those efforts appear to have been temporarily beaten back, with the Department of Agriculture formally rejecting an earlier memo that ordered government officials not to release any "news releases, photos, fact sheets, news feeds, and social media content" saying that it was "committed to maintaining the free flow of information between our scientists and the American public."

At the Environmental Protection Agency (EPA) – a frequent punching bag for Republicans and climate change deniers – employees were ordered not to talk to the press or release any information publicly. Several EPA websites were "updated" by Trump officials to remove links and references to climate programs that were not regulatory, under the logic that they were reflective of policies of the previous administration.

Two anonymous employees then informed Reuters that they had also been ordered to remove the entire climate change page from the EPA's website. "If the website goes dark, years of work we have done on climate change will disappear," one of them was quoted as saying.

An immediate outcry caused the Office of General Counsel (OGC) to intervene and say it would review the implications of removing the material, with Trump's transition team agreeing to "stand down," according to sources at the EPA.

These extraordinary efforts by Trump officials to impose their will on government departments is exactly the sort of authoritarian behavior that many commentators – and millions of marchers – have been concerned about.

And it has proven to be the first round in what is likely to be a long and ongoing battle between a Trump Administration that views any information that does not align with its beliefs as a threat, and ordinary government employees doing their jobs. According to Trump, climate change is a Chinese hoax rather than a scientifically provable fact that risks permanently damaging our planet. However, that belief is unlikely to hold much sway with the thousands of scientists and fact-based policy experts the US government employs.

When it comes to the highly unusual fight between park rangers and the new administration, however, the origins of it in many ways pinpoint the problem: Donald Trump's own insecurity while head of the executive branch.