Revenue is vanity and profit is sanity. Right, Seagate?

Better be, hmmm. Earnings up despite falling revenues 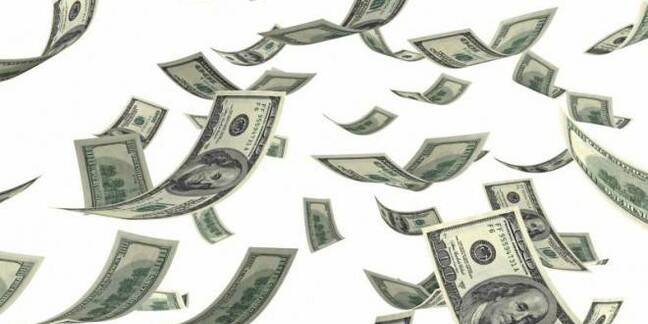 In its second fiscal 2017 quarter, Seagate's profits rose even as it shipped fewer disk drives, through manufacturing cost reductions and increased component counts in high-capacity drives.

Prepped remarks by Steve Luczo, Seagate's chairman and CEO, said: "In the December quarter we achieved near record results in gross margin, cash flow, and profitability." Seagate said that it generated $656m in cash flow from operations, paid cash dividends of $188m, and repurchased 4.1 million ordinary shares for $147m in the quarter.

In the earnings call, Luczo said: "The drivers of our improving performance, particularly in the December quarter, are combination of market demand trends across our high-capacity storage solution portfolio, component cost optimisation within our storage products, and the structural cost improvements we are driving throughout our company, particularly within our manufacturing operations." 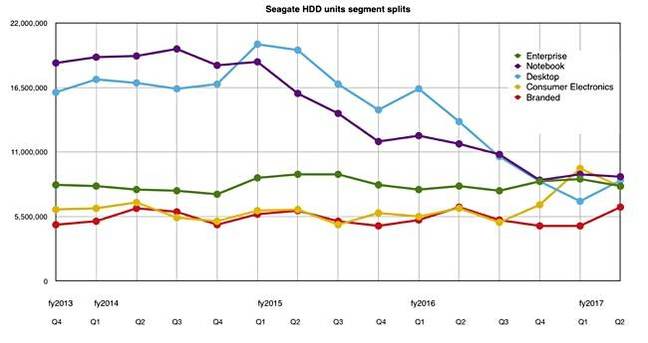 Against the overall pattern of declining unit ships we can immediately see a quarter-on-quater rise in desktop and branded disk sales. Although CE (consumer electronics) drives saw a quarterly fall, they are still higher than a year ago. Stifel MD Aaron Rakers said: "Seagate's results benefited from the ramp of the 1TB/platter 2.5-inch mobile and CE-focused HDDs."

Luczo added: "Our 8TB product leads the market in cost and performance and we are pleased with the ramp of our 10TB product in terms of quality, performance, and customer qualifications. For the last few quarters, our 12TB product has been with customers for evaluation and the feedback has been positive."

He also predicted the arrival of 16TB drives:

During the next 12 to 18 months, we expect the nearline market to be diversified in capacity points for different application workloads, with use cases from 2-4TB products for certain applications [and] up to 16TB for other use cases.

Rakers reckons Western Digital has an 85 per cent to 90 per cent share of the 10TB helium-filled drive market, a technology Seagate was late in adopting, but could enter this quarter.

Luczo also mentioned Seagate's arrays and solid-state products, saying: "Our Cloud Systems and Silicon Group demonstrated sequential growth in the December quarter, with particular strength for our flash-based solutions." He did not provide any numbers.

Seagate's growth is being driven by high-capacity needs in enterprise, desktop and mobile disk markets. Luczo said: "We see growth in all those applications that require high capacity... going from 8 to 10 to 12 to 16 [TB], you're going from six to eight disk [platters], at least, on the nearline products and we do think there are opportunities for more heads and disks on desktop and notebook, as people need higher capacity as well."

Seagate can increase revenues as disk drive unit ships fall because it will put more heads and platters into the drives it ships.

Seagate's outlook for the third quarter is revenues of $2.7bn – they were $2.6bn a year ago. Luczo said: "We believe Seagate will achieve revenue growth in calendar 2017." Rakers comments: "This guide is based on expectations of stable demand with a seasonal sequential unit and Exabyte decline (units and capacity ship declining on average 9 per cent and 7 per cent sequentially over the past three years)."

The drive arrays need development to compete with entrenched competition in the HPC and general on-premises enterprise array markets while the solid-state storage products are, compared to Seagate's disk drives, in a lamentable state. Rumours of an alliance with SK Hynix surfaced in December but nothing since has come to light. ®