Did I say that? Bullish MS man finds quotes ripped out of context 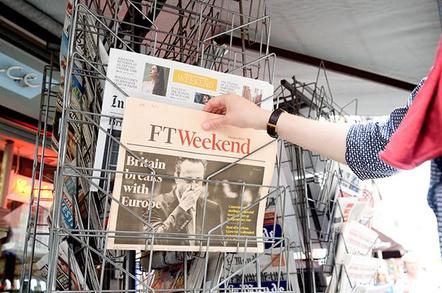 Microsoft has committed itself to the UK after comments by a manager were ripped out of context.

Asked directly whether the Microsoft was thinking of following UBS and moving Microsoft UK jobs into Europe, Larter replied: "We at Microsoft are pretty clear that we're committed to the UK as it stands. There are some concerns that we have, that we need to see the UK getting right as part of the Brexit process. But if they do do that, then the technology digital industry won't be affected as the finance industry is.

"We'll be OK and we could have quite a bright future for the tech sector in the UK."

Larter said Microsoft was looking for assurances in two key areas: dataflows and migration. Regarding the former, he said, the UK would be reassessed whether it was an "adequate" recipient of EU citizens' personal data.

"We've just opened data centres in the UK... the UK is EU's largest cloud market and it is set to double by 2019. That bright future will not be possible if we cannot transfer data into UK data centres," said Larter.

However, Larter said the government had made the right noises, and he was encouraged that President Trump would also get a corresponding deal in place with the UK.

"Services are the engine of the UK economy... they are data-driven by nature. In any future trade deal we're hoping to see a data liberalisation aspect. We've had positive statements from President Trump about how trade agreements will be fast-tracked."

"Hopefully where we will end up is [with] some element of control particularly over lower wage immigration, but with flexibility over high-skilled people. If they're high skilled, we've struggled internally to bring people from the US, from India, from China even, on a week-by-week basis, because the restrictions on immigration from outside the EU are so severe, because we couldn't control migration from inside the EU."

However, a remark by Larter about import tariffs sparked a series of stories from a doom-hungry press. Larter said he hoped that once outside the EU, the UK would not impose import tariffs on servers manufactured in Europe or China. That was enough to spark a fresh round of fake news, with The Independent feeding its readers wildly inaccurate headlines:

On the point of server pricing, it seems unlikely that, barring further fluctuations in sterling, Chinese-made electronics imported into a post-Brexit UK would get any more expensive. If anything, they would get cheaper. The EU has no trade agreement with China and imposes tariffs on imported goods, while last week Theresa May said she hoped to have free trade agreements in place with our major trading partners including China. That would make a post-Brexit Britain more attractive to business, particularly as corporation tax is lower here than in major EU rivals such as France.

Just as some Brexit advocates are keen to put a Panglossian spin on the technical difficulties of Brexit, the anti-Brexit political and media establishment (including The Economist, FT, BBC, Guardian and Independent) has an insatiable appetite for Brexit Bad News.

Presumably so they can tell us, "We told you so." And if this means ripping quotes out of context to create "fake news", so be it. ®