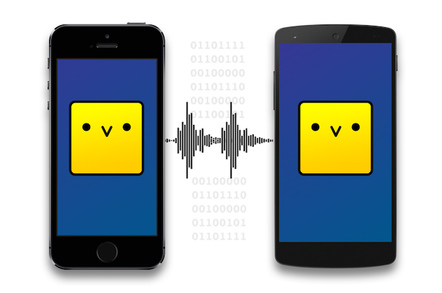 Audio-based networking may seem an unusual choice for the Internet of Things, especially when used for machines to bellow information at each other inside a nuclear power station.

The Register spoke to Chirp at yesterday's IoT Tech Expo conference in London, where the firm's Daniel Jones, chief science officer, explained how the British startup's tech is being used by EDF Energy for monitoring equipment in the French company's generating stations.

"We encode data dynamically so it can be sensed in realtime to any device with a microphone," said James Nesfield, Chirp CTO. "The interaction and medium itself is beautifully simple."

Broadcasting in the audible and ultrasound ranges, Chirp's technology can be used for low-rate data transmissions within "earshot", making it a close fit to the Internet of Things market.

The company started off as more of a consumer-focused operation and recently signed a deal with Activision, in which its tech has been deployed as part of the Skylanders gaming franchise, reaching around 300 million users.

Activision was concerned that "parents wouldn't want kids to browse the internet" while playing Skylanders Imaginators, which appeals mainly to the youngest end of the market. In addition, the company didn't want to burden parents with "account login configuration for seven-year-olds, but still wanted [the kids] to be able to transfer their custom in-game characters from the TV to the second screen" – the second screen being something like a companion mobile app.

Nesfield noted that once Chirp was deployed in Skylanders Imaginators, videos on Twitch and YouTube which included Chirps for user-generated characters resulted in everyone listening receiving the character too – which brings to mind what happened when a US television host commenting on a news story said the phrase "Alexa, order me a dollhouse."

Data rates per chirp "vary from 25bps to 100bps ballpark, dependent upon range, acoustics, noise, transducer sensitivity and other environmental factors," said Nesfield. Range is a variable in itself; as he points out, that varies "like our everyday experience of sound does".

Jones likes to compare Chirp to TCP/IP. It is a transport layer: while the encoding works "in much the same way as Morse code", to brand Chirp inherently insecure because of that is a bit like complaining about someone who picks up a megaphone and reads out his passwords in clear text.

"You can layer other technology on top of Chirp," Jones told his audience. "We provide the networking medium, then you can use that."

As for the nuclear power stations, Chirp's tech has found a useful niche in IoT sensor applications where traditional RF networking cannot be used. Nuclear power stations have an absolute ban on RF over fears of interference – thereby ruling out Wi-Fi, Bluetooth and all the usual go-to wireless networking technologies – and when EDF wanted to monitor equipment in its turbine halls the usual shielded cable was seen as too costly and bulky.

"They've got machine plant they want to monitor, diagnose and talk to," said Nesfield. "Chirp is being used in those contexts because it's not RF and doesn't interfere."

The other big advantage of Chirp over other non-RF tech such as infrared is that it doesn't need line-of-sight between sensor and receiver. Quite literally, if you can hear it, it'll probably work.

Chirp has also opened up its SDKs to world+dog, which Nesfield describes as "the real pleasure... of having some ideas of interesting or extreme examples of our technology being put into action. Things like, 'Hey, I've heard of your tech, can it be used for this?' and saying oh my God, yes, we hadn't thought of that." ®

One day, your gizmos can bellow nuclear power station info at each other too

Chirp! Let's hear it for data over audio

Women in tech: Not asking for raises is your 'superpower' – Nadella. *chirp*...*chirp*

QuoTW What's that sound? Was that a mass tweet?