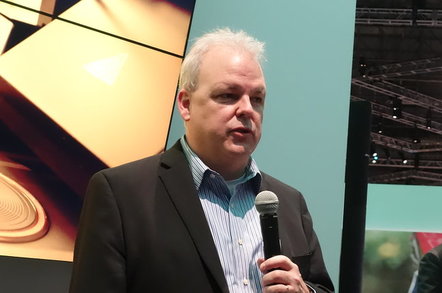 Well, well, whaddya know? Meg Whitman announces Martin Fink’s retirement as CTO and HPE Labs top dog, where he evangelised the Machine and memristors, but the fabled techie was clearly not ready to swan off into a post-work life of shed-building and ocean cruises just yet. He's back in the industry and mad for it.

Fink has been made CTO at WD. Yes, that’s the WD that makes disk drives and has assembled a formidable integrated flash chip, controller and drive capability, most recently by buying SanDisk. That’s the SanDisk that has a ReRAM agreement with HPE to provide a stopgap solid state memory technology while the memristor is still being developed.

Fink didn't leave HPE to join WDC and, by taking on this new role, he's given lie to third party proclamations of retirement. Indeed questions may now be asked about why exactly he came to leave HPE. Nutmegged?

El Reg was surprised when the man upped sticks before his baby, The Machine, was a thing. Perhaps Fink decided he didn't like the way the project had gone.

“[Fink] will play a key role in the innovation within the Storage Class Memory (SCM) category, and will lead WDC’s technology innovation agenda as the company continues to transform and differentiate its solutions offerings.”

WDC CEO Steve Milligan claimed Fink had been a "leading voice on the value and promise of memory-driven computing and will lead our continued innovation focus areas, including the commercialisation of Storage Class Memory solutions."

WDC’s current CTO, Steven Campbell, plans to "pursue other opportunities" outside of the company.

Campbell arrived at WDC through the HGST buy and was made WDC CTO in September 2015. WD said he "played an important role in the acquisition of SanDisk and in building the company's technology capability and storage solutions portfolio". ®