Elementary, my dear IBM: When will Watson make money? 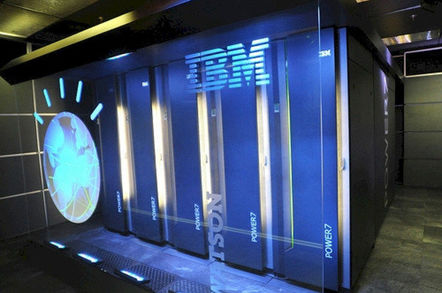 IBM Watson has taken heat from Wall Street for not adding to Big Blue's revenue as the company reported a 19th successive quarter of decline.

The Watson brand won worldwide attention back in 2011 when the supercomputer defeated human contestants during a special series of television quiz show Jeopardy. Now the brand lives on in the corporation's IBM Watson Group with its many Watson-themed directorates, which chief executive Gini Rometty declared would pull in $10bn in revenue by 2024.

But while Watson's revenues are indeed increasing, IBM's operating costs in driving that growth are going up faster. This leaves the corporation with ever-uglier margins in its cognitive solutions segment, a key part of the "strategic imperatives" on which it is pinning its hopes for the future and hiding the evidence of decline.

IBM doesn't give much away about Watson's performance, but its sales are included within the "cognitive solutions" segment that also includes IBM's "solutions software and transaction processing software" – things such as IBM's analytics tools.

Cognitive solutions grew 1.4 per cent to $5.3bn for the quarter largely driven by growth in cloud, analytics and security, IBM said as it reported its latest fiscal results Thursday.

Overall, IBM claimed: "[S]trong growth in our strategic imperatives, cloud, analytics, security and mobile. These offerings generated $33bn in revenue, and now represent over 40 [per cent] of our revenue. And they're high value offerings, with a gross margin that raises overall IBM."

But quizzing executives following IBM's financial report on the fourth quarter of 2016, Morgan Stanley's Katy Huberty noted that although Watson was getting a "pretty significant share of the press" – to put it mildly – unlike the other businesses that it was cited alongside, Watson was "not contributing to revenue".

Huberty probed when Watson would start bringing in money.

IBM admitted to shaving spent a combined $16bn on R&D and acquisitions during 2016, including buying 15 companies such as the $2.6bn acquisition of Truven Health Analytics.

"Do you have visibility as to when we should expect an inflection in revenue recognition from Watson, or should we just not think about this as a contributing factor or moving the needle in our models over the next couple of years," Huberty asked.

IBM's chief financial officer Martin Schroeter didn’t give a straight answer. Rather he said revenue would come through Watson serving IBM's strategic imperatives and cognitive software. Watson is the "silver thread" running though Watson Health and Financial Services, IBM's IoT and security, he said. "Watson is firmly, firmly established as the silver thread that runs through those cognitive solutions and you can see all of that in the solution software performance."