You know how online shops love to keep tabs on you? Now it's coming to the offline world 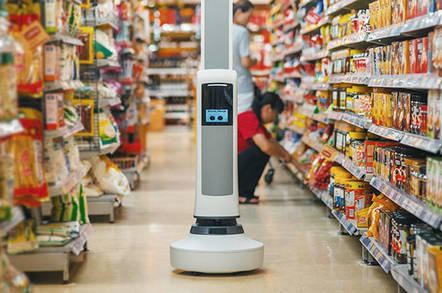 Intel promises to provide real-world retailers with the same analytics as online stores, with the release of a new internet-of-things retail platform.

The company promises to bring sanity to the IoT world, providing a single horizontal platform that will work with a wide range of sensors and standards but present a simple interface to companies.

The open-source analytics platform is cloud-based and will provide real-time analytics and actions – letting store employees know what they need to restock, for example. It is designed to be easy to introduce to stores, according to the company.

It has worked with a range of companies in an effort to cover most of the hardware requirements, including Avery Dennison, Honeywell, Fujitsu and SAP. However, tellingly, it is also introducing its own specific retail multi-sensor with an RFID reader and antenna. Future versions of the sensor will include video, Wi-Fi and BLE (bluetooth smart/low energy), all running on an Intel Atom processor, the company said.

That Intel feels the need to put its own sensor into an already crowded market may flag that the company is having the same problem as everyone else: the disparate systems currently available make it hard to build a simple platform that covers everything.

To go with the platform and sensors, Intel also "announced" an existing HP-created point-of-sale machine that runs on Intel's i7 and Xeon processors. It will allow stores to keep track of sales and inventory.

Krzanich said on stage that, combined, the systems will "take retail to the next era of highly efficient and personalized shopping, and intelligently lead businesses into the future."

In his post he added: "Until now, detailed shopper data was only available to online storefronts. At Intel, we believe that increasingly retailers will be separated by those who have data and use it to grow and optimize the shopping experience, and those who don't and make their decisions based on 'experience' and subjective observations."

Along with the platform, he also highlighted a retail robot – Simbe Robotics' Tally – that can scan shelves and make sure that a store is stocked, with products in the right place, and with the correct prices.

The robot is intended to work while customers are still in the store. It's powered by an Intel processor, of course. ®