'Exploding e-cig cost me 7 teeth, burned my face – and broke my sink!' 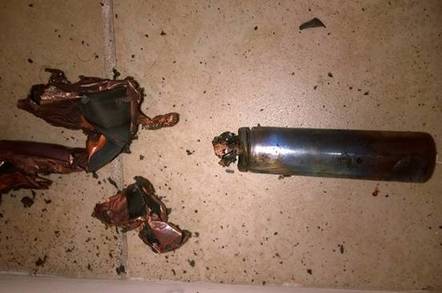 Destroyed ... The remains of the self-destructing e-cig (Source: Andrew Hall)

NSFW pics A man claims his e-cigarette exploded mid-puff, blew out seven of his teeth, gave him second-degree facial burns, wrecked his bathroom, and put him in intensive care.

Andrew Hall, a Toyota car salesman in Pocatello, Idaho, says he was having a few drags on his cyber-ciggy while preparing to go to work when the gizmo erupted in his mouth.

The downward force of the detonation was so intense that the mock cancer stick cracked his sink and left soot marks up the wall, we're told.

"I vape – I know, terrible and uncool – but I no longer do, and I hope to possibly sway those that do to maybe reevaluate or find other methods of smoking," he wrote on his Facebook page. 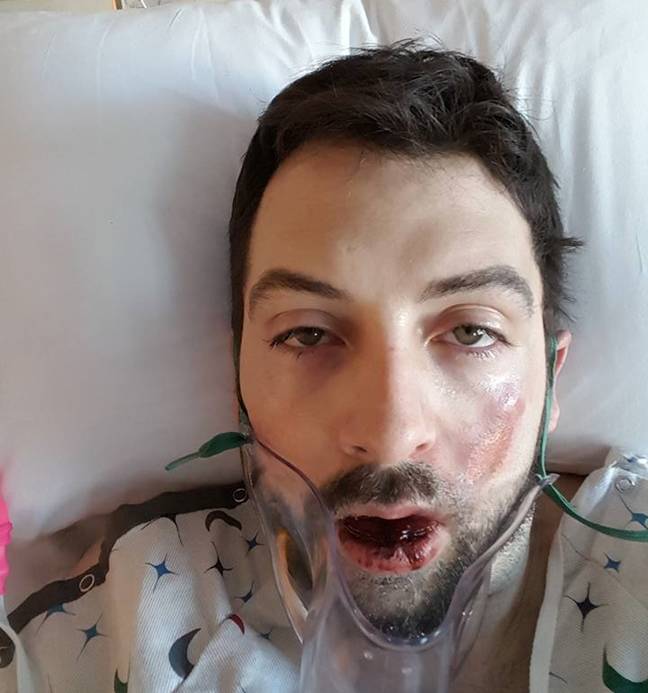 Ouch ... Andrew Hall in hospital after the explosion (Source: Facebook)

"I've been doing this for about a year now and assure you I did not do anything I wasn't supposed to: the battery was in right, always had the shop put it together when I first bought it and added things, and maintained it the right way while taking their advice," Hall said on Sunday.

"But it exploded in my face. I've lost at least seven teeth, got second degree burns to face and neck, and have been pulling chunks of plastic, teeth and foreign objects from my mouth, throat and lips." 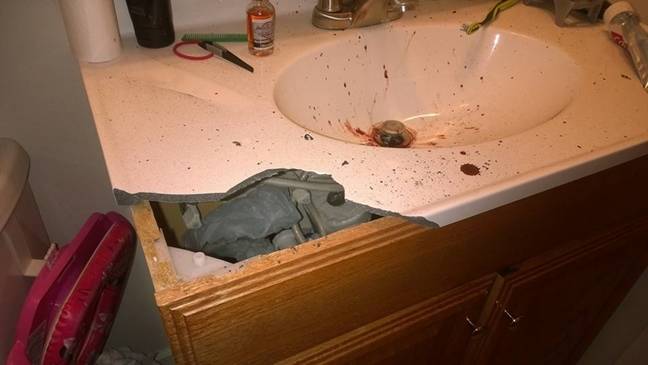 Sink ruined ... There's an awful lot of power in a battery

From what we can tell, Hall was using a customized vaping doodad that's nothing like the off-the-shelf devices available in gas stations and convenience stores. The e-cig was powered by an LG HG2 3000mAh battery, which is only slightly smaller than those found in top cellphones.

Hall said he unclipped the charger from the battery and fired up the faux coffin nail. It then exploded and left him in such poor shape he was rushed to hospital, we're told.

"I can't say thank you enough for all the great things and good wishes and prayers I've been receiving from Facebook all around the world," Hall added yesterday.

"Despite the negativity as well that obviously comes with the territory, I want to thank everyone again for the support and kind words. A lot of you have shared with me similar accidents and I hope you and your loved ones recover soon as well and don't have to experience anything like that again.

"Hopefully today I get to find out how soon I can get back to work and get some teeth back in my mouth as well."

While the former psychology student insists the vaping gizmo was fitted together correctly in the shop, it seems likely that it was either built wrong, or the battery was overcharged or faulty. It's a pity that a device designed to make smoking safer may have proved – in this case – to be positively dangerous.

Hall claimed the self-destructing gadget was built from a Twisted Vapers RDA. We're awaiting a response from the manufacturer. The now ex-vaper was not available for immediate comment when El Reg popped him a message on Wednesday. ®

Pitch of the week: Helping to stamp out e-cigarettes while removing hurdles to digital learning

Comment Buy our networking gear and get rid of vaping. Think of the children!

UK.gov not quite done with e-cigs, announces launch of new inquiry

Thinking of the children so you don't have to

See kids, your parents were right – smoking is bad for you

UK government's war on e-cigs is over