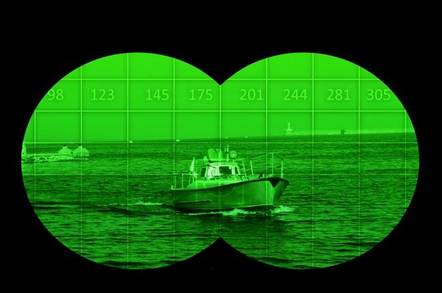 DARPA, the boffinry nerve-center of the US military, has awarded a contract to develop a cross between a missile and an artillery shell for use by the Navy.

Dubbed the Multi-Azimuth Defense – Fast Intercept Round Engagement System (MAD-FIRES) program, the proposed projectile will combine the precision and maneuverability of a smart missile with the rapid-fire capability of an artillery shell. DARPA has awarded an $8m contract to Raytheon to develop such a device.

"Specifically, MAD-FIRES aims to incorporate enhanced ammunition rounds able to alter their flight path in real time to stay on target, and a capacity to continuously target, track and engage multiple fast-approaching targets simultaneously and re-engage any targets that survive initial engagement."

DARPA says the smarter munitions are needed to cope with smaller threats against US naval ships, such as small motorboats and drones. The dangers of these were amply demonstrated in the Millennium Challenge 2002 wargame, where basic missiles and small boats loaded with explosives successfully sank 19 US warships, including an aircraft carrier.

The MAD-FIRES munitions need to be stored in large, relatively cheap quantities and must be like standard artillery. However, they also need to be maneuverable enough to deal with small targets. DARPA wants to cut the cost of using such munitions tenfold or more with the new system, while increasing kill ratios.

Raytheon already has skin in the guided artillery game – the company's Excalibur shells are guided by external fins that pop out after firing and it claims they achieve around 2 metres (6.5 feet) of accuracy with a range of 50km (31 miles). The company already has a smaller version for naval use under development that might be useful for this contract.

DARPA funded some of the initial research into smart bombs, and conversion kits of fins and laser sights that can be strapped onto existing "dumb" bombs to make them steerable. The agency has also demonstrated that smart bullets are feasible, albeit at a heavy price.

We've already seen such an example with the Navy's USS Zumwalt, which was supposed to be armed with rocket-assisted smart artillery shells called the Long Range Land Attack Projectile. While the munitions worked, they also cost $800,000 a pop, meaning they were too expensive to even practice with and have since been dropped.

With MAD-FIRES, the agency wants to keep costs low enough for mass deployment but accurate enough to be useful against smaller targets. The DARPA contract will determine whether that can be done. ®