Thiel's upstart has the info needed for a Muslim registry 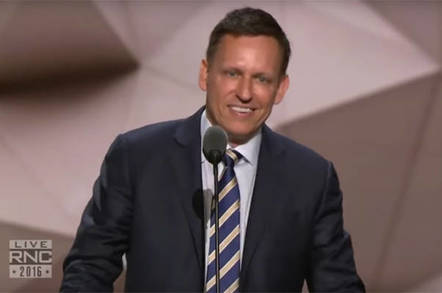 Silicon Valley engineers will protest outside the headquarters of data analytics firm Palantir Technologies Wednesday, demanding greater transparency over how its databases may be used by the incoming Trump Administration.

"Palantir and Peter Thiel should be held accountable for potentially enabling Trump's efforts to deport three million immigrants and create a Muslim database," reads the Dobetter.tech website set up to organize the protest.

Peter Thiel is cofounder of CIA-backed Palantir, and has become the main tech advisor to president-elect Trump following his public backing of the controversial businessman during the presidential campaign.

Following Trump's promises to create a registry of Muslims living in America and persistent claims that he will put greater surveillance on them as a group – as well as prevent Muslims from certain countries entering the country at all – engineers in California are worried that Palantir's existing relationships with the federal authorities will be used to further those goals.

As the website notes, Palantir is a highly sought-after company in Silicon Valley. "The company regularly beats out Google and Facebook when it comes to hiring Stanford's top CS students," it notes, adding that it "currently represents the gold standard of software engineering and data science rigor in Silicon Valley."

However, two databases that the company runs and manages for the federal government have given cause for alarm.

The Analytical Framework for Intelligence (AFI) pulls data from federal, state and local law-enforcement databases to create individual profiles and citizens thought to represent a risk are tracked. The database includes personal details, social connections and travel histories, according to documents.

The fear is that the same system can be used to develop the Muslim registry Trump promised on the campaign trail. As such, the protestors want Palantir to do as Facebook, Google, Apple and others have promised, and refuse to have anything to do with such a system.

Similarly, the Immigration and Customs Enforcement office has paid Palantir tens of millions of dollars to create a system called Falcon that combines and analyzes databases covering family relationships, immigration, addresses, criminal records and employment information. Protestors are concerned that Falcon will be used by Trump's proposed "deportation force" to identify and eject people living illegally in the United States.

When details of both databases came out following research into Trump's possible policies, Palantir's CEO Alex Karp and Peter Thiel both denied they would develop a Muslim database. Thiel said "we would not do that," and Karp said: "If we were asked, we wouldn't do it."

But those responses are insufficient, claim campaigners who note that very little is known about the AFI and Falcon systems, how they work, and what policies apply to them.

"We are asking that Palantir [takes] precautions to ensure that abuse will not happen on its already-existing platforms, and to be transparent to the public about this process," the Dobetter site notes. "Thiel and Karp's statements of 'we would not do that' is a far cry from any reassurance that Palantir actually has mechanisms in place to hold itself accountable."

As such, protestors say that until Palantir discloses what steps it has taken or will take to prevent abuse of its systems, and makes "significant progress in transparency and accountability," they will refuse to work for the company and will "pledge to continue questioning Palantir's outsized presence and reputation in our community."

It's currently unclear how large the protest will be or how many have signed up to the Dobetter.tech "pledge," but a Facebook page set up to organize the protest on Wednesday currently has just under 400 people saying they are "interested" in attending and just over 50 saying they will attend. ®