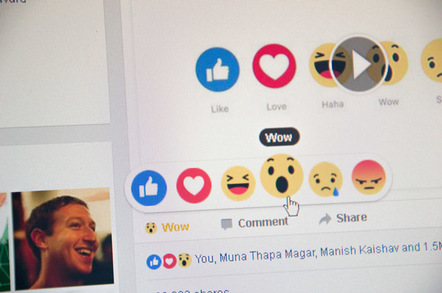 National elections in the UK and US, and Britain's 2016 referendum on membership of the EU demonstrated the growing power of social media to swing views and win votes.

Twitter gets a lot of attention due to its use by journalists and politicians – not least president-elect Donald Trump – and its relative openness making it easy to study.

But accounts of recent UK votes make it clear that Facebook is far more important – not due to fake news, but because it can reach huge numbers of voters with targeted adverts.

"It’s The Sun wot won it," claimed the British tabloid in April 1992 following the surprise general election victory of John Major's Conservative party and the rag's repeated rubbishing of Labour leader Neil Kinnock. Now it appears to be Facebook wot wins votes, and potentially elections too.

Facebook is more widely used than other platforms: UK regulator Ofcom reckons Facebook reached 38.9 million people in April 2016 – nearly twice its closest rival LinkedIn, with Twitter in third place. But that reach is only useful because Facebook knows so much about its users, allowing highly detailed targeting of those who might change their votes.

For tight elections that depend on voters in a few places, such as US swing states and UK marginal constituencies, demographic data is essential. Facebook has been actively touting the Conservative's 2015 general election victory as one of its online success stories. "The 2015 UK general election was the first in which digital marketing was used extensively, and the first in Europe to show such a nuanced and focused use of Facebook advertising," the company boasts in a case study designed to entice others.

"Facebook provided the Conservatives with the means to reach the people that mattered: key demographics in marginal constituencies," getting to 80.65 per cent of Facebook users in those seats. "We can say for the first time in a UK election that digital made a demonstrable difference to the final election result," Facebook's case study quotes Conservative digital director Craig Elder as saying.

In his recent book on the Brexit vote All Out War, Sunday Times political editor Tim Shipman describes Facebook as "far and away the most influential platform" in reaching voters. However, he writes that when the Conservative party's data crunchers tried to repeat the trick during last year's Brexit referendum, they were not as effective. One reason was that every vote counted equally towards the national totals so the ability to love-bomb someone in a marginal and ignore their near-neighbour in a safe seat was not so useful.

But another was that those campaigning to leave the EU used other types of Facebook targeting, such as its ability to identify racists. Leave.EU, a pro-Brexit group allied to Ukip leader Nigel Farage, used Facebook to target supporters of groups [paywalled] including the British National Party and the National Front. Shipman writes that it stopped doing this after being caught out by Tom Edmonds, the Remain side's Facebook expert, who set up fake profiles for far-right extremists and spotted the Leave.EU adverts.

Dominic Cummings, who was campaign director of the main pro-Brexit group Vote Leave, argues his organisation simply used Facebook more effectively than its opponents. In a blogpost here, he writes that Vote Leave served about one billion targeted online adverts, mostly through Facebook, towards the end of the referendum campaign: "We ran many different versions of ads, tested them, dropped the less effective and reinforced the most effective in a constant iterative process."

Brexit does not yet appear among Facebook's list of electoral success stories – although it does list the Scottish National Party's 2015 general election success along with victories by Canadian Liberals, a pro-democracy organisation in Romania, and the re-election of Todd Strange as mayor of Montgomery in Alabama using the slogan "Let's Keep Montgomery Strange".

Facebook is pushing such win stories to political campaigners in Germany, which will elect a new federal parliament this autumn: a version of the Conservative party case study appeared in a German-language guidebook for politicians and office holders published last year. However, the company is running into increasing political opposition there, including from the woman whose future will be decided by those elections.

Last October, Chancellor Angela Merkel told a media conference that the algorithms used by big media companies should be made more transparent, to allow citizens to ask how their online behaviour is influenced. If this did not happen, algorithms could distort people's perceptions, she added.

Germany has already taken action against Facebook. Last September, one of its privacy regulators ordered Facebook to stop collecting user information from WhatsApp, which it also owns, and with 35 million users in Germany is more popular than Facebook itself.

But there are new reasons for politicians to take action. The chancellor's decision to allow one million immigrants into the country in 2015 may help the right-wing Alternative für Deutschland party in this year's elections – and for obvious historical reasons German politicians are wary of anything that helps the far-right organise. According to news magazine Der Spiegel, far-right groups have made use of Facebook to build support, with the Pegida protest movement that opposed Ms Merkel's immigration policy having started as a group on the service.

In December, the parliamentary head of the Social Democratic party Thomas Oppermann said that ministers are planning a bill requiring Facebook and other digital platforms to set up services to check reports of online hate speech, slander or fake news. Failures to delete offending material within 24 hours could result in fines of up to €500,000, along with requirement to distribute proportionate corrections. Justice minister Heiko Maas has revived his idea of making Facebook criminally liable if it fails to delete racist posts.

Facebook's response has been to involve other organisations. "We do not want to be arbiters of truth ourselves," wrote its boss Mark Zuckerberg in November, "but instead rely on our community and trusted third parties." In December it announced tests of new ways for users to report fake news to fact-checking organisations, which will be able to slap a "disputed" label on dodgy articles which make them appear lower in users' news feeds.

The company has now announced it will introduce this function in Germany, with journalism group Correctiv doing the checks. Whether this is enough to satisfy German ministers remains to be seen. Facebook promotes its highly targeted advertising tools as ways to help win elections and referenda. Even if it can't yet communicate telepathically with its users, political campaigners acknowledge it already has a very good idea of what they think.

And while fake news looks much less important than targeted advertising in influencing voters, the way in which Facebook strives to avoid responsibility for what it carries makes it a target.

Arguably it exacerbates this through its rules-based editorial judgements, such as deleting a complaint by the Norwegian prime minister about its banning of a world-famous picture of the naked victim of a Vietnam war napalm attack.

Faced with a company that helps decide whether they get re-elected, politicians may use fake news as their justification to try to take back control. ®