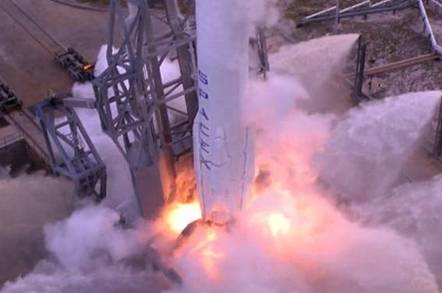 A file picture of a SpaceX launch. Pic: SpaceX

The rocket lifted off from Vandenberg Air Force Base in California at 9:54am local time, carrying a satellite payload on behalf of Iridium Communications.

Ten minutes after the rocket took off, its first stage booster unit was jettisoned and safely recovered in the upright position on a so-called “droneship” in the Pacific.

The launch is an important milestone for the company, whose reputation was hit by a test-refuelling failure on 1 September last year. In that instance a SpaceX rocket blew up on the launchpad, incinerating a Facebook satellite.

Investigators are said to have blamed the explosion on a helium tank inside the craft’s liquid oxygen tank failing.

Iridium plans another nine satellite launches – all via Musk's space-trucking kit – in order to replace its existing satellite constellations, which provide voice and data communications. Each launch will carry 10 satellites. ®