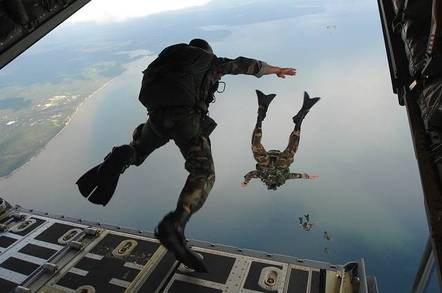 Thanks to careful use of LDAL these parachutists are actually jumping into a swimming pool. Er, perhaps. File photo

British defence contractor BAE Systems says it has developed a laser-powered "mirage on demand" which can be used to bend the very fabric of the skies to military commanders' whims.

The Laser Developed Atmospheric Lens, developed at BAE's Warton factory in Lancashire, works by "changing the Earth's atmosphere into lens-like structures to magnify or change the path of electromagnetic waves such as light and radio signals", according to the company.

At its most basic LDAL uses a powerful laser focused on a particular patch of sky. This artificially induces a mirage effect, similar to how desert travellers are able to see oases over the horizon thanks to heated air rising from the hot sand and refracting light towards the viewer.

Reg readers may have observed a similar hot-air-mirage effect over a distant road surface on a hot day – or over an about-to-hit-meltdown server. LDAL takes that effect and puts it into an on-demand package.

The LDAL exploits something called the Kerr Effect. This is where the refractive index of a material changes in response to an applied electric field. The electric field created by the LDAL laser pulse "causes the optical properties of the atmosphere to change", in BAE Systems' words. By inducing local ionisation of the atmosphere through that electric field, creating a plasma, the path of light can be bent to man's will:

By using LDAL to create a 'refractive lens' through temporarily heating up a small region of the atmosphere, it would be possible to enhance [an] aircraft's imaging sensor by collecting much more of the light from the adversary area, delivering a much better image. At much longer sensor wavelengths, including radio waves, a 'reflective' or mirror-like structure would be formed through many small pockets of ionised atmosphere created by the LDAL system.

There's even a video of all this slightly outlandish tech, which is perhaps more reminiscent of GoldenEye for the N64 than modern-day defence capabilities.

Naturally, BAE Systems is interested in using this for military purposes such as observing enemies – as well as potentially using it to deflect enemy lasers and similar beam weapons of the near future. In that way it could be seen as a forerunner to Star Trek-style shield systems, where energy-based forcefields deflect and absorb beam weapons.

So far there is no news of any customers – or practical demonstrators – of the LDAL. ®