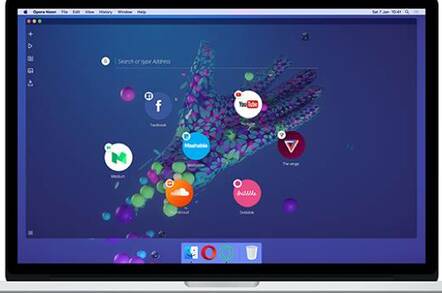 Opera, the Norwegian browser maker acquired last year by a Chinese investment consortium, on Thursday introduced the browser equivalent of a concept car.

Opera Neon, available for macOS and Windows, is intended as an exploration of browser design alternatives. It isn't a replacement for the current desktop version of Opera and only some of its features are likely to be integrated into future Opera updates.

What's more, it lacks a few of the features that make the current stable version of Opera worth using, such as built-in ad-blocking, a built-in VPN, and the ability to add extensions.

"It is a concept browser – an experimental browser that envisions the future of web browsers similar to the way concept cars predict the future of automobiles," said Krystian Kolondra, SVP of engineering at Opera in a blog post.

Kolondra contends that browsers, after two decades, have become rather stale and are tied to a document-centric model that doesn't reflect the way people interact online today. Opera Neon's additions, however, are mainly on the surface, in the interface layer. Under the hood, Opera Neon relies on the open-source Blink rendering engine, just like Chrome.

Neon is visually appealing, but it manages to be confusing at the same time. It launches into a start page that copies your desktop wallpaper. So you're presented with a window that looks like your desktop, but isn't, and lacks any files present on your actual desktop.

In place of any desktop files, Neon's start page features circular bookmarks – initially a handful of popular sites – and a vertical right-hand tab bar that functions as a visual bookmark history list.

These circular bookmarks, or bubble tabs, animate in an appealing way on mouseover and mousemove events, but eye candy of this sort doesn't necessarily make for more productive browsing. Users of desktops with touch screens, however, may find the interface changes to their liking.

The left-hand sidebar includes icons that launch the search omnibox, a video player, an image gallery, an image snapshot and crop tool, and a download manager. Some users may find these options improve the browsing experience because they're easily accessible – more so at least than a version of Chrome that has been crammed with dozens of extensions and menubar bookmarks.

Kolondra suggests Neon's system of automatic tab management is "intelligent" because it promotes frequently accessed sites to the top of the tab management window, while less frequently visited sites will sink away toward the bottom of the window.

Neon's omnibox supports several popular search engines, but defaults to Google – Opera may want to rock the boat, but not to the point of upending expectations.

The video player in the left-hand sidebar can launch a miniature video window that persists while browsing another page. It's a useful alternative to tiling browser windows to view videos while scanning other pages.

The ability to take web page snapshots of varying sizes and to save the images in a gallery for later review is well-executed.

And the split-screen mode simplifies working with two pages at once, even though there are plenty of utilities, like Magnet on the Mac, that provide similar functionality.

In terms of aesthetics, Neon is appealing, but the novelty of its interface means some retraining may be necessary. For those who just want websites to load quickly and happily accept browsers as largely undifferentiated commodities, Neon's glow of novelty won't last long. But web designers and developers may find Opera's experiment intriguing. ®