Admittedly, we'd all want to tear everything apart if we had kit shoved in our heads 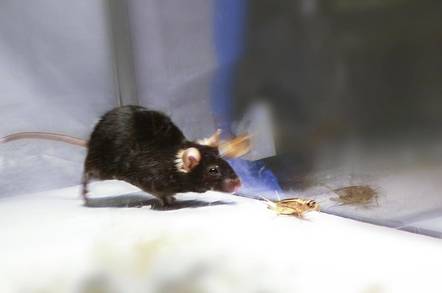 Video Scientists have turned wimpy mice into ferocious hunters by zapping their brains with a laser.

Using optogenetics, a technique that makes specific neurons fire when stimulated with light, the scientists activated a set of neurons in the amygdala.

The amygdala, a small region within the brain, is associated with memory, emotions – including fear – and motivation. A paper published in Cell on Thursday shows the amygdala can be manipulated to make mice immediately aggressive.

When the laser is off, the lab mouse acts normally, preferring to walk around its cage and occasionally sniff the air. But when the laser is turned on, beast mode is triggered and the mouse pounces on and bites moving bug toys and live insects, as well as inanimate objects like wooden sticks and bottle caps.

"We'd turn the laser on and they'd jump on an object, hold it with their paws and intensively bite it as if they were trying to capture and kill it," said lead investigator Ivan de Araujo, coauthor of the paper and associate professor of psychiatry at Yale University.

The mice weren't completely blinded during their mad killing frenzy, however, and could still identify friends from foes. When other mice are added to the cage and the laser is switched on, the mice did not attack each other.

"The system is not just generalized aggression. It seems to be related to the animal's interest in obtaining food," de Araujo said.

Upon closer inspection, de Araujo and his team found that different neurons in the amygdala were responsible for different behaviours. One set controlled pursuit and another initiated the kill. If each type of neuron was damaged, the researchers found that the mice would pursue the prey but couldn't kill it, as the force of the bite was weakened by 50 per cent.

It's unknown how both neurons coordinate, but de Araujo said, "There must be some primordial subcortical pathway that connects sensory input to the movement of the jaw and the biting."

Experiments began when de Araujo became interested in the brain areas that were associated with feeding and hunting. Different areas in the brain were probed, until researchers stumbled upon the central region of the amygdala that controlled the mice's muscles, the jaw, and the neck.

"This area was perfectly compatible with an activation system that drives the motor behavior associated with hunting," he said. ®