AWS, you crack us up. Rebrands Westminster 'Webminster'

Nothing to do with gov shifting to its cloudy services, apparently 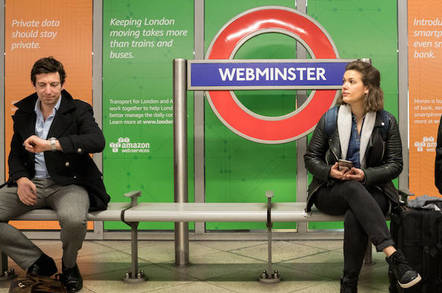 LogoWatch Confused commuters disembarked at Westminster tube this morning to discover the station at the seat of power had been rebranded "Webminster" in a "hilarious" guerilla marketing campaign by Amazon Web Services.

The one-day rebrand is part of AWS's re:Start training programme intended to educate folk on the latest software development and cloud computing technologies.

Other organisations such as ARM, Claranet, EDF Energy, KCOM, Sage and Tesco Bank have also signed up to the initiative.

In a statement reminiscent of Peter Mannion's "Call App Britain" campaign in The Thick of It, culture minister Karen Bradley said: “Increasing digital skills in the UK is a major priority for the government and we are working to make sure that everyone has the skills they need.

"We welcome the launch of AWS re:Start, which is a fantastic initiative bringing together employers from different sectors and providing the foundation on which they can continue to train and grow the UK’s digital workforce.”

But the rebrand might be fitting in another way as well. Now that AWS has two data centres in the UK, many public sector organisations are increasingly considering a move to its cloudy service.

Call me cynical, but you just know the whole #Webminster thing today at Westminster is going to relate to something very, very unexciting.

Why. Why when I'm half asleep. I thought I had got off at the wrong stop. #webminster pic.twitter.com/G9drTpj8A4

It is not the first time a station has been temporarily rebranded for an advertising campaign. In 2015, Canada Water was rebranded Buxton Water.

The Register wonders what other stations could be rebranded along a tech theme.