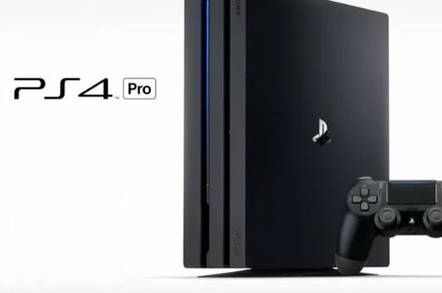 PlayStation 4 gamers are growing increasingly irritated with Sony after a rising tide of complaints over audio and video blackouts in the PS4 Pro console’s PSVR headset.

Reg reader John told us that strange things were happening with his PSVR, adding that Sony tech support were not very helpful when he contacted them to ask what to do about his own headset’s problems.

Day one I noticed strange things were happening with PSVR and PS4 pro.  These issues do not effect a normal PS4 and PSVR, it is specific to just the PS4 Pro.

For a few seconds I would get a black screen showing up, then the image would re-appear.  The QA tester in me immediately decided to work out if this was an app, game or something else.

This drop out happens after few minutes of the PS4 Pro booting up.

It doesn’t matter what application you are running, whether it’s a game, a Blu-Ray movie or even just sitting idle on the menu, the same black screen drop out occurs.

It only happens with the PSVR processing unit connected between the TV and PS4 Pro; I’m using all the Sony provided HDMI cables and this can happen through the PSVR headset as well as with the headset turned off, i.e. using the passthrough to the TV or viewing the output on the PSVR, headset on or off in a nutshell.

Having contacted Sony for help, John showed us an email from their tech support suggesting that he checked everything was plugged in and powered on.

Irate users have been posting about problems with the headsets on the official PlayStation-branded Reddit subforum for a while.

“I have the same issue. Never had it with my OG PS4. As soon as I upgraded it started. Not a HDCP issue to me as I'm displaying on a 1080p projector. Nothing else has changed except for the Pro. Exact issues as you. Very annoying,” added fellow gamer DrJykill.

A post on the official Playstation.com forums from November last year details the same problem: “I get a bit of static and a black screen for a second, interrupting my play session, but then it returns to normal. On a couple of occasions I've had a complete cut out, showing the hdmi with an X sign showing an input error, once fixed by turning off and then turning on the VR and reconnecting the cables in case they'd gotten loose, and the second time having to reboot the Pro when nothing else would work.”

Sony has been invited to respond to the claim that the PSVR has a mystery fault, and we were still awaiting their substantive response by the time of publication.

If you’re encountering similar problems, leave a comment below. ®