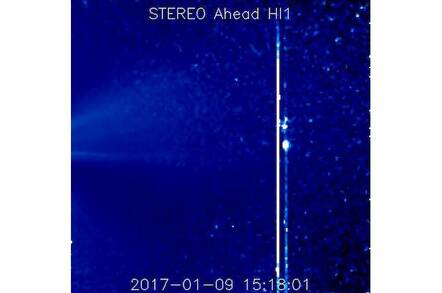 On Saturday, the Catalina Sky Survey spotted a near-Earth asteroid of respectable heft – and today, it passed between us and the Moon.

2017 AG13 (the Minor Planet Center, MPC, entry is here) is about the size of a 10-storey building. Its velocity to Earth is 11 kilometres per second.

The size estimate comes with a fairly large error bar: the MPC says it's between 11 metres and 34 metres wide, putting it roughly the same size as the rock that caused havoc in the Russian city of Chelyabinsk in 2013.

The Slooh Observatory Tweeted this graphic about 2017 AG13:

While you were hitting snooze, we nearly hit an asteroid! At 7:47 AM EST an asteroid we only first spotted Saturday gave us a wake up call. pic.twitter.com/BbAQc7e2EJ