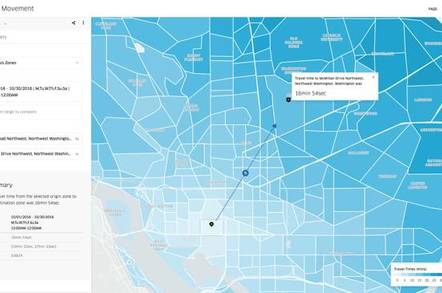 Uber, which has been fighting to withhold ride destination data from New York City, on Sunday threw municipal governments a bone with a service called Movement.

Movement aims to provide driving data to urban planners so local transportation systems can be optimized to operate more efficiently, a challenge that increases as population growth in cities outpaces infrastructure improvement.

The service can be compared to Google Trends, except that it aggregates and displays anonymized Uber travel data instead of search queries.

Movement can be used, for example, to calculate travel times between two points in a city. While there's no API for integrating Movement with third-party apps at the moment, Movement data can be downloaded for use in other applications.

"Uber trips occur all over cities, so by analyzing a lot of trips over time, we can reliably estimate how long it takes to get from one area to another," said product manager Jordan Gilbertson and head of transportation policy Andrew Salzberg in a blog post.

Initially the service will be limited to travel time data, but Uber expects to expand the utility of its data sets. "While we’ve started with zone-to-zone travel times, we’re excited to explore a wide range of data-driven transportation and infrastructure decisions," a company spokesperson said in an email to The Register.

In the coming weeks, Uber plans to invite city planners and researchers to use Movement, followed by the general public in a few months. The company has been testing the service with city officials in Manila, Melbourne, and Washington, DC.

Infrastructure Partnerships Australia, a national infrastructure group that has been working with Uber to pilot test Movement, issued a report in October that highlights the value of such data for policy decisions. "Used well, Uber’s underlying data and that of other transport operators, allows us new opportunities to better target infrastructure investment, assess the actual benefits of individual projects – and to understand how Australia is tracking in developing smarter, better cities and solving its mobility issues," the report says.

But the real value of the data for perpetually cash-strapped cities is the cost, which doesn't require any municipal investment, infrastructure expansion, or additional hiring. As the IPA report notes, the data is available "at a very low monetary cost."

For cities that get hooked on cheap data, however, there may be a disinclination to challenge Uber on other issues. ®