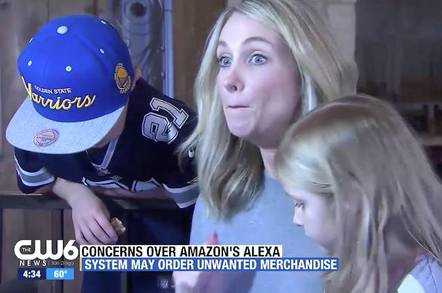 A San Diego TV station sparked complaints this week – after an on-air report about a girl who ordered a dollhouse via her parents' Amazon Echo caused Echoes in viewers' homes to also attempt to order dollhouses.

Telly station CW-6 said the blunder happened during a Thursday morning news package about a Texan six-year-old who racked up big charges while talking to an Echo gadget in her home. According to her parents' Amazon account, their daughter said: "Can you play dollhouse with me and get me a dollhouse?" Next thing they knew, a $160 KidKraft Sparkle Mansion dollhouse and four pounds of sugar cookies arrived on their doorstep.

During that story's segment, a CW-6 news presenter remarked: "I love the little girl, saying 'Alexa ordered me a dollhouse'."

That, apparently, was enough to set off Alexa-powered Echo boxes around San Diego on their own shopping sprees. The California station admitted plenty of viewers complained that the TV broadcast caused their voice-controlled personal assistants to try to place orders for dollhouses on Amazon.

We'll take this opportunity to point out that voice-command purchasing is enabled by default on Alexa devices.

This is not the first time an ill-conceived TV spot has caused havoc with voice-control systems. In 2014, a Microsoft Xbox commercial featuring actor Aaron Paul demonstrating Kinect voice control was blamed for causing consoles across the US to spontaneously boot up and launch the game Titanfall every time the ad aired. ®