These boots are made for kicking imaginary things, and that's just what they'll do

World's first VR shoes to go on sale in Autumn 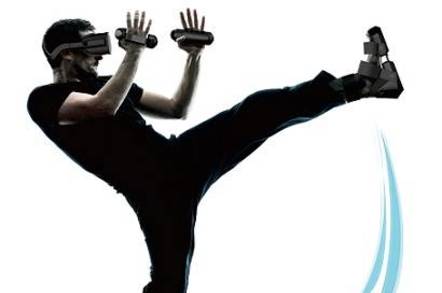 The Taclim footwear in action

CES 2017 Concerned that a virtual reality headset just isn't enough real-life escapism for you? Then perhaps you need to pair it with VR gloves and boots for that double dose of sensory deprivation.

Cerevo – short for "Consumer Electronic REVOlution" (yes, REVO is capitalised for some reason) – a Japanese company specialising in "creating networked devices for consumer and professional users", has released the world's first VR footwear.

The gloves and boots, known collectively as Taclim, were showcased at CES, the largest electronics and consumer technology trade show, through a demo of Headbutt Factory, a VR title for the PlayStation 4.

The clunky, black clogs are packed with three tactile devices located within the shoe to provide the soles of your feet with a buzz that supposedly improves gaming experience.

Like all the other wacky gizmos exhibited at CES, it also comes with wireless connection via Bluetooth. There is also a sub-GHz version, which provides a more stable connection without interference from other devices like the Wi-Fi-connected, microphone-fitted, allegedly "smart" hairbrush or the smart AI washing machine.

Sensors provide haptic feedback for your hands and feet and adapt to the images and sounds in VR. "Users become more engrossed, resulting in increased immersion above and beyond what is currently experienced visually and aurally when in a VR world," according to a statement from Cerevo.

If your shoes run out of juice, you'll have to wait three hours to get a full charge for more fun-filled hours of vibrational stomping and air kicking.