Puny galaxy packs a big punch: A gazillion joules' worth of radio bursts

Boffins get best fix so far on mysterious 'FRB' location 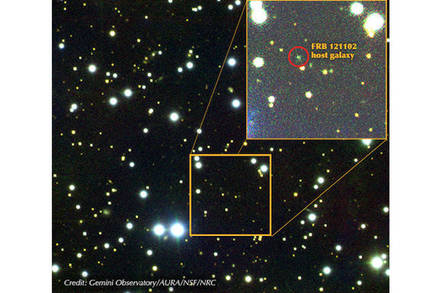 Sorry to say this, but fast radio bursts still aren't alien communications. There is a surprise, however, in the latest science about them – the only repeating burst yet known comes from a "puny" galaxy with no obvious sources for such a cataclysmic cosmic event.

We don't know quite what they are, but the galactic mysteries abbreviated to "FRB" are Douglas-Adams-level "space is big." The FRB whose location has just been pinpointed to a few billion light years distant releases enough energy in milliseconds to run Earth for 30 billion years: 10 million trillion trillion joules.*

FRBs have intrigued astronomers ever since the first observation in 2007 (confirmed in 2013) led to a concerted effort to find more (so far, 20 are known). The amount of energy released in such a short time tells us something big is happening, but what? That's what makes localisation important: it provides a chance to observe what's in a galaxy that might be generating the radio waves.

The team that traced FRB 121102 to a galaxy roughly 3.2 billion light years away (972 megaparsecs) was led by Shami Chatterjee of Cornell University.

FRB 121102 was first spotted by the Arecibo radio telescope in Puerto Rico, but unlike other sources, it wasn't a one-off event. Because it's a repeating FRB, astronomers had the chance to get a better fix on its position, using the 27 receivers in the Karl G Jansky Very Large Array in New Mexico, and the 21 dishes in the European Very-Long-Baseline Interferometry Network.

With those observations in place, the researchers then turned to the Gemini North telescope in Hawaii for optical observations, delivering the image above.

The host galaxy is genuinely tiny, and that sets a new puzzle for astronomers. Team member Cees Bassa of the Netherlands Institute for Radio Astronomy said in a statement, "I think the whole team was surprised to see that our exotic source is hosted by a very puny and faint galaxy."

Scientists have previously speculated that one-off FRBs could be caused by collisions between black holes or between neutron stars, but neither of these can apply to the repeating FRB 121102.

As University of Toronto director of the Dunlap Institute for Astronomy and Astrophysics Bryan Gaensler put it:

The position of this #FastRadioBurst reveals a surprise: a small, wimpy galaxy. Not a dramatic, violent, neighborhood like you might expect.

The researchers offer the hypothesis that FRB 121102 is caused by the leftovers from a supernova, being energised by a young and rapidly spinning neutron star – but a lot more observation will be needed to test that idea.

The work is published in Nature, and the analysis of the Gemini optical observations is at the Institute of Physics here. ®

* Thanks to Bryan Gaensler for also clarifying that the "10 million trillion trillion" joules is an estimate of the energy released in each burst.