Double-ring phenomena for the 0.1 per cent fans 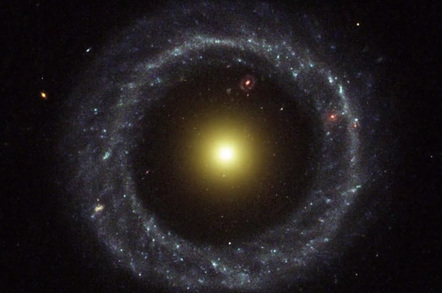 Hoag's Object is a rare phenomenon, but PGC 1000714 is stranger still

A rarer-than-rare galaxy 359 million light years away from Earth has been spotted by physicists.

Designated PGC 1000714 [paywalled], the galaxy is a ring-shape system orbiting a cooler centre without any connection between the two – a formation referred to as Hoag's Object.

Just 0.1 per cent of all observed galaxies are Hoag-type systems; the majority follow the hub and spiral-arm standard like our own Milky Way or the neighbouring Andromeda. PGC 1000714 is rarer still, though.

Hoag's Object, discovered 67 years ago by astronomer Arthur Allan Hoag and named after him, features a single ring of blue stars orbiting a yellow core.

PGC 1000714 features a second ring of blue stars with both rings orbiting a red core.

Nobody has yet managed to adequately explain the formation of the original Hoag's Object – never mind the related-yet-different PGC 1000714, which was spotted by scientists at the University of Minnesota Duluth and the North Carolina Museum of Natural Sciences.

Burcin Mutlu-Pakdil, lead author of a paper on this work, said in a statement: "The different colors of the inner and outer ring suggest that this galaxy has experienced two different formation periods."

Galaxy rings are regions where stars have formed from colliding gas – hence the reason for the different colours.

"From these initial single snapshots in time, it's impossible to know how the rings of this particular galaxy were formed," Mutlu-Pakdil said.

One possibility is that the outer ring may be the result of this galaxy incorporating portions of a once-nearby gas-rich dwarf galaxy.

The galaxy was spotted and analysed using multi-waveband images from observations in the southern hemisphere, using a large-diameter telescope in the Chilean mountains. These images were used to determine the ages of the two main features of the galaxy, the outer ring and the central body.

The outer ring is 0.13 billion years old and the red core 5.5 billion years. Higher-resolution images are needed to infer the age of the inner ring.