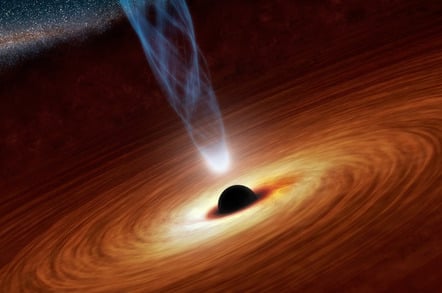 NASA will embark on a new mission to explore supermassive black holes, neutron stars, and pulsars hidden within the depths of space.

The Imaging X-ray Polarimetry Explorer (IXPE) mission was chosen among 14 other proposals during the rigorous selection process for NASA's Astrophysics Explorer programmes.

It's expected to launch in 2018 and will cost $188m – a modest price tag compared to NASA's largest missions on the Flagship programme often valued at over $1bn.

The IXPE mission will send three telescopes to analyse the powerful cosmic X-rays emitted from objects with extreme gravitational, electric, and magnetic fields.

The telescopes will operate alongside the Hubble Space Telescope, Chandra X-ray Observatory, and XMM Newton to spot X-ray emissions from some of the most energetic objects in space.

"We cannot directly image what's going on near objects like black holes and neutron stars, but studying the polarization of X-rays emitted from their surrounding environments reveals the physics of these enigmatic objects," said Paul Hertz, NASA's astrophysics division director for the Science Mission Directorate.

Under Barack Obama's administration, NASA's 2017 fiscal year budget [PDF] is $19bn, a slight decrease of $300m from the space agency's final spending bill in 2016. It is unknown how the current President-elect, Donald Trump, will affect NASA's budget in the future, but its Explorer programme is designed to be cheap and quicker to execute.

Although missions on the Explorer programme are smaller, the scientific payload can be great. It has launched more than 90 missions, and has made a list of important discoveries such as Earth's Van Allen radiation belts, magnetosphere, and the shape of its gravity field.

The Cosmic Background mission in 1989 led to the 2006 Nobel Prize for uncovering the near-perfect blackbody and anisotropies of the cosmic microwave background radiation. ®