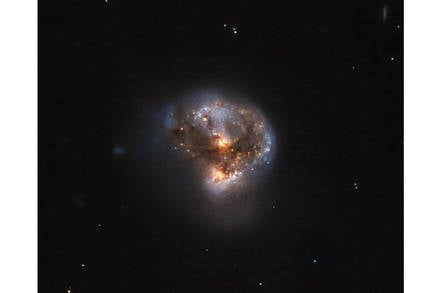 The name's boring but the science isn't: an entire galaxy spied by the Hubble Space Telescope is acting as a microwave-emitting laser, or maser.

Think of the process going on here: in a laser, molecules in a crystal are stimulated to add energy to electrons, and when they shed that energy, they emit coherent light (or, at longer wavelengths, microwaves).

The “megamaser” galaxy IRAS 16399-0937 Hubble imaged is 370 million light years from Earth, and it's huge. NASA Goddard's announcement says it's about 100 million times brighter than masers found in the Milky Way.

In megamasers like IRAS 16399-0937, NASA says some parts of a galaxy – like a gas cloud – are “in the right stimulated physical condition” to radiate the microwaves.

The energy that's driving it comes from its unusual double-nucleus structure – two galactic cores which, although they're 11,000 light-years apart, are in the process or merging and are interacting with each other.

One nucleus is a “starburst” region where lots of new stars are forming; the other is a LINER (Low Ionization Emission Region), whose emissions come mostly from “weakly-ionized or neutral atoms of particular gases”.

The release notes that the LINER region also contains a 100-million-solar-mass black hole. ®