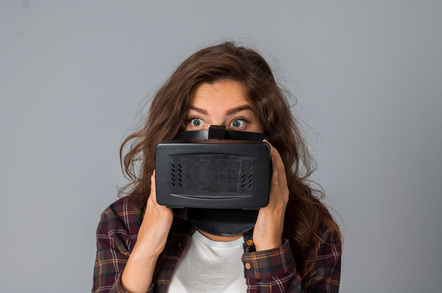 CES 2017 The PC market may be flaccid but Lenovo is taking a punt on virtual reality headsets with Microsoft.

According to reports (here, here and here), Lenovo's headset will work with apps in Microsoft's Windows Store and some of Microsoft's HoloLens software.

When contacted by The Register, Lenovo said it didn't have details to share about the technology or availability as it was still a prototype.

Lenovo with HP, Dell and Asus were last year reported to be working on VR headsets with prices starting at $299.

This slightly empty punt to the gadget press is reminiscent of when PC makers were racing to catch Apple's run-away iPad in the early 2010s.

Only by attending big reveals would OEM execs let you look at, but not touch, their mock-ups of machines that would – we were promised – take on the iPad.

They didn't. But it was, at the time at least, a calling card in an early line-up comprising HP, Dell, Blackberry and others also promising to take on Apple.

Times change, but hopes haven't and neither have the drivers with this, newer, market already becoming delineated by others – Samsung, HTC, Microsoft and Facebook via Oculus.

Number-cruncher analyst IDC in August highlighted AR and VR as a potential growth opportunity, growing from $5.2bn to $162bn by 2020 – CAGR of 181.3 per cent.

Half of worldwide revenue would come from hardware with software being overtaken by services revenue as those in business demand enterprise-class support.

VR as a whole would outstrip AR initially, thanks to consumer uptake with AR getting ahead with uptake in a variety of verticals according to IDC.

Contrast that with the PC market from whence Lenovo, HP, Dell and Asus hail.

Rival analyst Gartner in its largest snapshot of the PC market recorded an overall 5.7 per cent slump in sales for the third quarter – not just the eighth consecutive quarter of decline for the PC sector but the longest decline in the industry's history.

Lenovo was one of the biggest losers on Windows PCs, down 2.4 per cent, following Acer, which tumbled 14 per cent.

Consumers are holding on to their existing PCs for longer, own a range of devices, and now no longer see buying a new computer as a top priority. ®