If you all ask nicely, maybe they'll restore Program Groups? 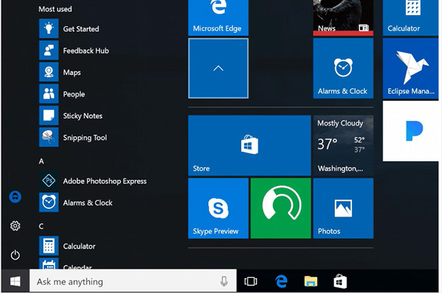 The Windows 10 Redstone 2 release, also dubbed the “Creators Update”, will allow apps to be nested, much as with Windows Phone 8, and the mobile edition of Windows 10. The update is expected around April, and aggregates work since the Anniversary Update in early August. Around a dozen builds have been released via the Insider Preview program since the official announcement in October.

The folders appear in an unofficial leaked build (14997) and MS Power User blog has a nice GIF of them in action, here.

The leaked build also showcases new tab behaviour in the Edge browser, and a system wide night mode, which reduces the blue light emitted by the display.

Windows 10’s current Start menu/screen thing is a complex hybrid of the Windows 8 start screen and the Windows XP/7 menu.

Like the sex organs of the duck, it's an inexplicable evolutionary artefact.