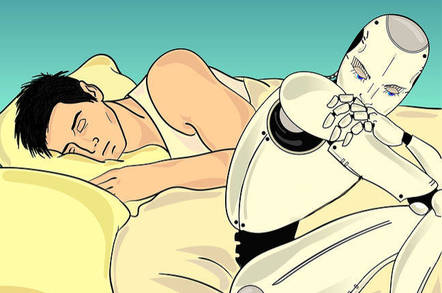 Well over a third of men would happily splash out on a humanoid sex robot in the near future, academics have found - despite there being no viable product on the market right now.

Researchers from the University Duisburg-Essen quizzed 263 chaps on their robo-amorous leanings, and co-author Jessica Szczuka presented their findings at the Love and Sex and Robots Conference at Goldsmith’s University yesterday.

They found that a stonking 40.3 per cent of the sample said they would “buy such a robot now or within the next five years.” Just to be clear, for the purposes of the survey, the researchers said sex robots can be understood as android robots (robotic replicated women or men) that are "built to satisfy sexual needs.”

“For this purpose,” the researchers continued, “the robots do not only provide replications of some secondary sexual characteristics (e.g. breasts), but also external genitals (e.g. labia). As this description would also be suitable for hyper realistic sex dolls, sex robots are also capable to move (especially with respect to movements that are important with regard to the fulfilment of sexual needs) and speak.” The latter of which might suppose some form of AI.

As the researchers note, “At present, there is no sex robot available that is suitable for the masses and that provides all the features listed above.” And if and when they do appear, they're not going to be cheap.

You might immediately summon up a mental image of who is most likely to put such a non-existent product at the top of their shopping list, and we’re guessing there’s a pizza-stained T-shirt and a possible lack of personal grooming involved.

However, this isn’t borne out by the research. The paper says the 40.3 per cent figure “highlights that sex robots could be of interest for more than only a fringe group.”

Even more surprising perhaps, whether respondents were already in a relationship, or had a fulfilling sexual life, had no bearing on their (potential) feelings towards robo-playmates. Similarly, general loneliness had no particular bearing on respondents’ interest in sex bots.

Rather, pre-existing attitudes towards robots and “anthropomorphic tendencies” ie, the “tendency to ascribe human characteristics to non-human objects” appeared to be the strongest indicators of the desire to buy sex robot.

Put plainly, people who are already wary of robots are unlikely to want to have sex with one. Likewise, the fact that people who already had a tendency to anthropomorphise objects - perhaps becoming overly attached with their cars, for example - definitely wanted to move beyond just liking robots. Though the researchers also speculated that “it could be imaginable that clients who pay a lot for sex robots are aware of the fact that robots are non-human, which could prevent their evaluations from falling into the uncanny valley.”

This is all just the beginning. The researchers accept that the study could be improved with a wider sample, and say “it should be a long-term goal to investigate real interactions between humans and sex robots. And let’s be honest, someone needs to actually invent a viable sex robot before things move from wish list to shopping list. ®