If at first you don't succeed, send another Mars lander – this time a deep driller 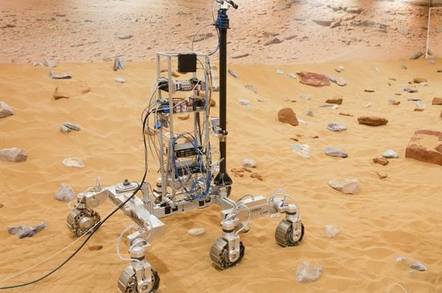 Hopefully this one makes it down in one piece

Undeterred by the crash of the Schiaparelli Mars probe during the first ExoMars mission, the European Space Agency has signed off contracts that will hopefully deposit a new and more advanced lander directly on the Martian Surface. In one piece.

In a ceremony in Rome, ESA inked a deal with private firm Thales Alenia Space to build and fly the ExoMars 2020 mission, which is trying to find the answer to the question posed by David Bowie and others – is there life on Mars?

Like its 2016 counterpart, ExoMars 2020 will be a two-stage mission. The mission calls for the landing of a descent module and its rover, weighing approximately two metric tons. Once on the ground, the base of the module will become a fixed climate monitoring science platform, while the rover will trundle off and dig up to two metres into the ground and analyze samples in its onboard laboratory.

"ExoMars is a cornerstone of ESA's exploration program," said David Parker, ESA's Director of Human Spaceflight and Robotic Exploration. "Using its miniaturized life-search laboratory and advanced robotic technology, the mission will explore the Red Planet in search of new evidence to answer questions that have long fascinated humanity.

So far, ExoMars 2020 is set for a launch in July that year, but there are many hurdles to overcome first. The key one is working out exactly what went wrong the first time.

On October 16, the ExoMars 2016 mission arrived around the Red Planet and detached the Schiaparelli probe for landing. After a series of computer errors, the lander's rockets shut down while slowly descending and thus plummeted between two and four kilometres before embedding itself in the Martian landscape.

The mission wasn't all bad news, however, as the Trace Gas Orbiter that delivered Schiaparelli remains in orbit and is sending back atmospheric sampling data. It is also scanning the surface to looks for signs of moistness.

The ExoMars 2020 mission will be all about getting samples of life or signs that it existed – thus the drilling. Given Mars' harsh, dry climate it's likely that life on the surface is non-existent, but a few metres down, where material is shielded from radiation and possibly damper, some form of bacterial life may exist. ®