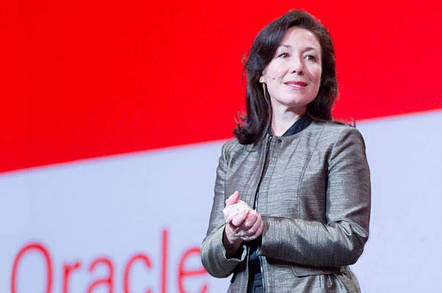 Oracle is once more waving around its cloud revenue figures in response to another quarter of falling hardware sales.

This ongoing drop in traditional hardware revenue comes as Oracle tries to shake off rumors that it will be winding down its on-premises system divisions from January.

Speculation is rife on anonymous internet boards, and it's been suggested by some of our industry contacts, that Oracle may lay off as many as half of its 4,000 or so people working on server and networking hardware, that the Sparc division is not long for this world, and that Solaris 12 will be canceled and the operating system put into maintenance mode.

Oracle has said none of the rumors are true. The database giant announced its latest quarterly financial figures on Thursday, and made no mention of any major cuts. Somewhat cryptically, though, in a conference call with analysts shortly after, co-CEO Safra Catz said:

The traditional hardware wing soaks up hundreds of millions of dollars of R&D and yet continues to shrink, fueling gossip that Oracle is ready to pull the plug.

Meanwhile, Oracle is axing 71 employees at its site in Austin, Texas, who were working on Project RAPID. It is feared Oracle will continue this approach, laying off teams in dribs and drabs starting from next year, to keep the changes under the radar. Again, the California giant denies there will be a significant reduction in workforce.

Over to the quarterly numbers. For the fiscal 2017 second quarter [PDF] that ended November 30, the enterprise computing behemoth logged:

Not surprisingly, Oracle executives chose to focus on the soaring returns from the cloud business, rather than the dropping on-premise software and hardware businesses.

"For four consecutive quarters our Cloud SaaS & PaaS revenue growth rate has increased," said Catz, who earlier in the day was named as a member of president-elect Donald Trump's transition team of advisors (she will keep her job at Oracle for the time being).

The growing cloud revenues will be needed to offset hardware revenues that continue to drop. Oracle executives blamed the 13 per cent drop in hardware revenues largely on the falling revenues in servers as well as costs related to its Micros Systems acquisition.

Have you got any more information on changes looming at Oracle? Message us securely and anonymously using Ricochet and our address: ricochet:m3bnxucau5ishl2h