Six yankee dollars a month everywhere except the Eurozone 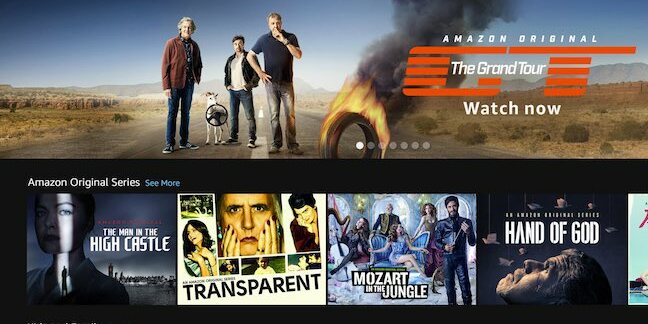 Amazon's flicked the switch on the global rollout of its Prime Video service, making it available in 200 nations around the world..

The streaming service will cost nothing if you live in a nation where Amazon Prime is available and you have already signed up for that service. Elsewhere in the world it will cost either US$5.99 or €5.99 a month, plus whatever your credit card provider charges for transactions in foreign currencies. To get you hooked, the company is halving prices for the first six months and running free one-week trials.

Amazon's flagship is the Top Gear reboot The Grand Tour, which it used to tease the world about this week's launch.

The company's now trying to excite us all about the rest of its program library.

The service looks slim compared to streaming rivals. Netflix has a far larger catalog of original content and its Android app plays nicely with Google's Chromecast and Apple TV. Our search of Prime Video's help content found no mention of either. Amazon does have iOS and Android apps, the service will run on Fire Tablets and “popular LG and Samsung Smart TVs.” Services like Hulu also look to offer rather more entertainment options than Prime, both in terms of programs and devices.

Amazon does, however, can use Prime Video as a way to make Prime more popular, and Prime is a play for wallet share that lures customers away from other retailers. Jeremy Clarkson's smugness is a small price to pay for Amazon if it makes customers less likely to roam widely around the web in search of either entertainment or other purchases.

Whatever the service's business model, it means network administrators at telcos, internet service providers and businesses have one more source of streaming video for which to figure out peering arrangements and other networking niceties, lest torrents of traffic bring grief along with giggles. ®