Get stuck into a containerization runtime this Xmas. Go on 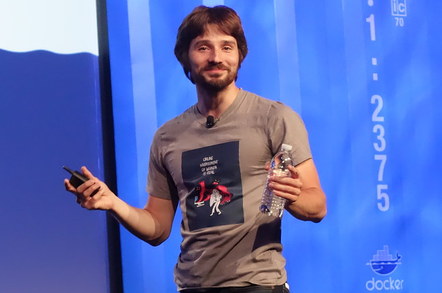 Docker on Wednesday plans offer the open source community a "boring infrastructure" component that nonetheless should excite those focused on software-based containers and benefit the blissfully unaware masses.

The container software maker intends to release the source code of containerd, a core container runtime, so that it can receive attention and improvements from developers who spend their time thinking about containerized infrastructure.

Pronounced "container-D" rather than the seemingly apropos "contain nerd," the software provides core primitives to manage containers on a host.

The "d" stands for "daemon" – containerd is a daemon, or automated process, to control runC, the standard container runtime released by Docker last year, and since reclassified as something less than a runtime following community input. Containerd handles transferring container images, container execution, and low-level storage and network interfaces across Linux and Windows.

"Think of containerd as the equivalent of the Linux kernel for this new generation of platforms," said Solomon Hykes, founder, CTO, and chief product officer at Docker, in a phone interview with The Register.

Docker will not be alone in pushing the software forward. Such is the significance of this bit of container-oriented plumbing – a common foundation for building non-Docker container products and services – that companies like Amazon Web Services (AWS), Google, and IBM, among others, plan to help maintain and contribute to the project.

Hykes said the fact that these large cloud service provides are making commitments not just in words but in contributing engineers underscores the interest in technological common ground. These companies don't adopt off-the-shelf platforms but they do adopt building blocks, he said. "We're eager to give them those because we get unique contributions back," said Hykes. "It creates a really powerful feedback loop. In the end, everybody wins."

Standardization of this sort stands to benefit every organization using containers by ensuring the software can be used across a wide range of infrastructure.

In order to avoid association with Docker or another commercial entity, the project will be separately branded and turned over to a neutral foundation that will oversee a community-defined release process.