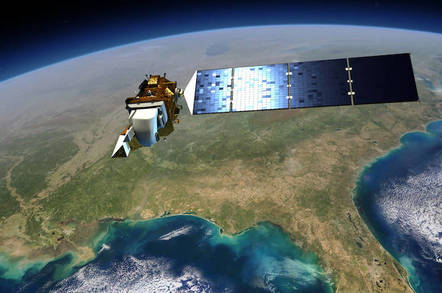 California Governor Jerry Brown promises that no matter how "absurd" the upcoming Republican presidential administration's response to climate-change science, the state of California will be ready with a robust response – with weapons ranging from satellites to databases to lawyers.

Speaking at the American Geophysical Union's Fall Meeting in San Francisco on Wednesday, Brown called out the Trump administration's threat to shut down NASA's satellite-based "politically correct environmental monitoring," as one Trump advisor has denigrated it.

Brown pointed out that there are California companies launching private satellites today — unlike in 1978 — and that the state has the labs and facilities to support its own climate-monitoring programs.

Noting how there have also been rumblings that the Trump administration is contemplating deleting climate-science data from public government databases, Brown said California was ready to help. "Look, we've got a lot of databases in California; we can take a few more," he said.

In response to Republican efforts to subpoena scientists' records and emails or create lists of Department of Energy scientists working on climate change, Brown noted that California not only has its share of scientists, it also has "plenty of lawyers" — and he'll not be shy about calling on them for help.

"We have the lawyers," he said, "and if anyone in Washington starts picking on researchers, you can be sure that you'll have a friend in California, and our Attorney General, and all the legal talent we can bring to bear."

Brown was clear that he believes the effort to combat those in the administration who want to quash climate-science research as well those who belittle it, such as "Breitbart and the other clowns," will require the combined efforts of scientists, the legal community, an informed public, and politicians.

Unlike politics, he said, science must focus solely on uncovering and disseminating the truth. Politics is different. "It's not a nice business," he mused, "but it's a hell of a lot of fun."

And while speaking to a few thousand scientists at the American Geophysical Union, Brown was clearly having a hell of a lot of fun. ®

PS: If you agree with Gov Brown, you'll love San Francisco's official response to the US presidential election outcome.