Now, each of you, take this check for $95 and get the hell out of my sight 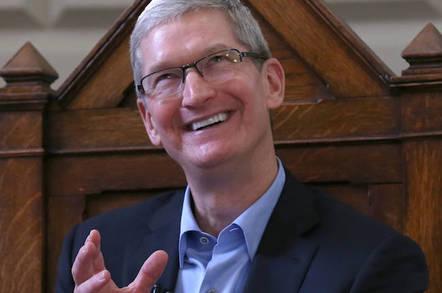 A California court has ruled in favor of Apple Store workers who accused the iPhone giant of trampling over their employment rights. It is a bittersweet victory.

The trial jury yesterday awarded store staff $2m after Apple was found to have illegally denied them meal and rest breaks, and was late giving departing workers their final paychecks.

The class-action complaint was first filed in 2011 in the California State Court in San Diego by four former employees. It was later expanded to a class of more than 21,000 current and former workers who held jobs at the Apple Store as far back as 2007.

Apple had been accused of a half-dozen violations of state labor laws, including California laws forbidding the failure to provide meal and rest breaks, full pay upon termination, and unfair business practices.

The complaint also makes note of Apple's notorious culture of secrecy, and how it has extended from Cupertino into the global chain of retail outlets, where employees are allegedly forbidden from discussing any information not available on Apple's website.

"The restriction from discussing anything about Apple or its policies is reinforced on Apple's labor policies themselves," the complaint, filed in the county of San Diego, reads.

"The majority, if not all, of Apple's employment policies make it clear that Plaintiffs aren't allowed to discuss Apple's working conditions."

While Apple profits have been slipping of late, the $2m payout would amount to little more than a rounding error on Apple's $9bn bottom line, and a maximum of $95 per worker. Chalk this one up as a win for Apple. ®

Updated Redmond slips out of key provision in discrimination case