So that's how Game of War can afford her 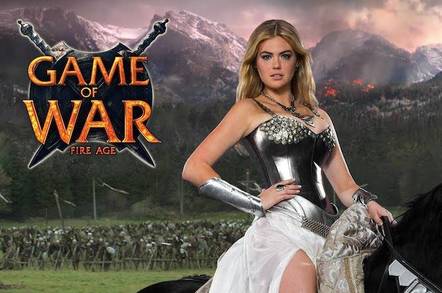 A California chap says he blew $1m in money stolen from his employer on Game of War, a freemium phone game fronted by swimsuit model Kate Upton.

Kevin Lee Co, of Rocklin, has pleaded guilty [PDF] to one count each of wire fraud and money laundering, and admitted to stealing roughly $4.8m from his employer through charges to company spending accounts.

The accountant faces up to 20 years in prison for each of the counts and, as a foreign national, will "almost certainly" be deported, the court said.

Co admitted that, during a seven-year period from 2008 to 2015, he used his position as head beancounter at heavy equipment supplier Holt of California to funnel money from company spending accounts to cover his personal purchases and alter accounting records to cover up the theft.

A joint investigation by the IRS and the FBI found that, as controller, Co had control over all of Holt's spending accounts and financial records. Using that position, Co conspired with two other unnamed individuals to make charges to Holt's business accounts and then hide the activity.

Over that time, the court heard, Co spent almost $1m of the money for in-game purchases on Game of War, the mobile app perhaps best known for employing buxom babe Upton to star in its telly ads. She was reportedly paid a million bucks to publicize the smartphone fantasy fighting game.

"Co also engaged in a money laundering scheme involving a portion of the embezzled funds, which was designed to conceal the origin of the money he embezzled," the Department of Justice said in announcing the plea deal.

Co is set to be sentenced on May 26, 2017 in the California Eastern US District Court. ®

Endorsement could come back to bite Evander Holyfield

'Advance video content' and years of backups dangled in the cloud

But the transport authority says that invalidates the card