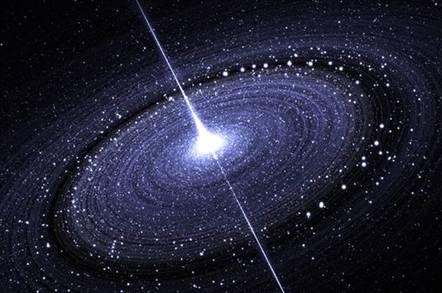 Last year, astronomers spotted what looked like a massive supernova, 200 times brighter than any seen before.

Use of the Hubble and Swift orbital telescopes as well as observatories here on Earth to make a close analysis of the event, dubbed ASASSN-15lh, indicates that the flash in the sky might not have been a supernova at all. Instead it could be the last burst of light from a star being ripped apart by gravity – a so-called tidal disruption event.

In a paper due to be published in Nature Astronomy today, Dr Iair Arcavi and his team will note that instead of one big bang, as you'd expect from a supernova, ASASSN-15lh actually emitted two separate bursts on the UV spectrum.

"With a massive black hole nearby the star gets disrupted," he explained to The Register. "As it is pulled apart, different parts of the star collide with each other and that's the cause of the first peak of light.

"It then dissipates energy as it falls onto the black hole and starts forming an accretion disc of material. The timescales on this work out."

The theory would solve a number of issues with ASASSN-15lh. Firstly, the sheer power of the event is off the scale for supernovae and there's no evidence from other examples that the amount of energy released fits the pattern. Secondly, ASASSN-15lh occurred in a part of the universe where stars had stopped forming and so, under current thinking, supernovae would be rare or unknown.

"Years ago we just wouldn't have been able to follow an event like this," said Andy Howell, one of the paper's coauthors. "This study shows that large-area surveys, a global robotic telescope network, and a NASA satellite can come together to reveal dramatic new discoveries that wouldn't be possible without each piece of that puzzle."

"This is like discovering a new kind of dinosaur," added Howell. "Now that we have the right tools and know what to look for, we're going to find more and get a better sense of the population. It is so exciting to have new ways of learning about black holes and stellar death." ®