Samsung, the Angel of Death: Exploding Note 7 phones will be bricked 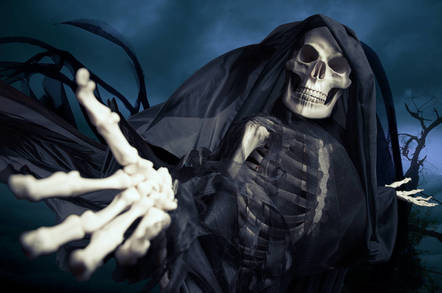 Anyone still using a Samsung Galaxy Note 7 has ten days to return their device for a refund before Sammy kills the handset for good.

The South Korean electronics giant says that an over-the-air update set for release on December 19 will effectively brick the devices for good, shutting off all phone and data connections and preventing the Android-powered handset from accepting a recharge.

This, Samsung hopes, will kill off the 7 per cent of sold Galaxy Note 7 units that have not yet been returned for a refund.

While the Note 7 is still legal to own (so long as you're not flying), Samsung has been extremely aggressive with the voluntary recall for the fire-prone handset.

"If you have not yet returned your device, you should immediately power it down and contact your carrier to obtain a refund or exchange," the notice reads.

Not everyone, however, will see their Note 7 go dark on December 19. Verizon says that it will not be taking part in the mass shutdown, but will continue to request that customers bring their handsets in to swap out for a new device.

"Verizon will not be taking part in this update because of the added risk this could pose to Galaxy Note7 users that do not have another device to switch to," the carrier says.

"We will not push a software upgrade that will eliminate the ability for the Note 7 to work as a mobile device in the heart of the holiday travel season."

Verizon says it has already discussed the matter with Samsung and the two will work to continue their current exchange program. ®

Well, at least it's beefier and cheaper than Motorola's throwback effort